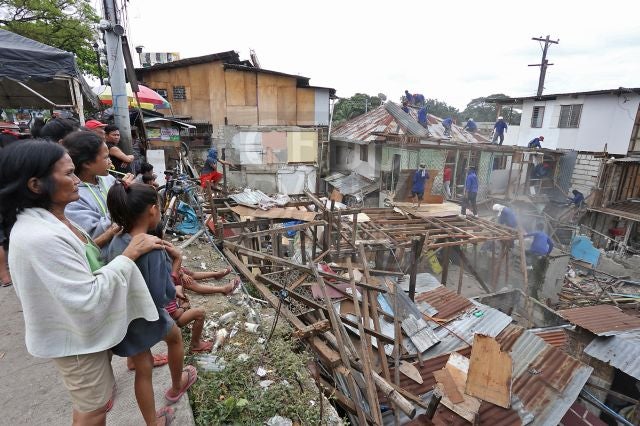 Settlers who earlier resisted the demolition team in Sitio Sta. Cruz Barangay Capitol Site, Cebu City have packed their belongings and left their homes an hour before noon yesterday.

Still others like 39-year-old Diane Culpa pleaded with the demolition team to dismantle only the second floor of her house since yesterday was her father’s death anniversary.

“I lost my father a year ago. Today, I lost my house. Can this day get any worse?” Culpa said. Culpa had been living in Sta. Cruz, Barangay Capitol Site for 29 years.

She said she and her husband are looking for an apartment to stay in the meantime before they  rebuild their house.

Guanzon, who opposed the demolition, instructed residents to rebuild their houses because the lot is public land.

“We are just satisfying Judge Navarro’s court order but after this, settlers will rebuild their houses,” Guazon said.

Most of the families whose homes were demolished in last Wednesday’s operation crowded a tent which Guanzon set up on a portion of M. Velez Street. Others set up makeshift tents.

The 70-strong demolition team arrived at 10 a.m. to continue dismantling the houses.

Residents claimed that the order covers only Lot 6085-A-1 on M. Velez St., and didn’t include houses along Don Gil Garcia St.

Sheriff El Cid Caballes said they expect to finish the demolition before the end of the month.

Cebu City Hall’s Division for the Welfare of the Urban Poor (DWUP) said the city will extend financial aid to the families who will be classified as “calamity victims.”

DWUP chief Collin Rosell said those families who have yet to be relocated may avail of the city’s housing program.