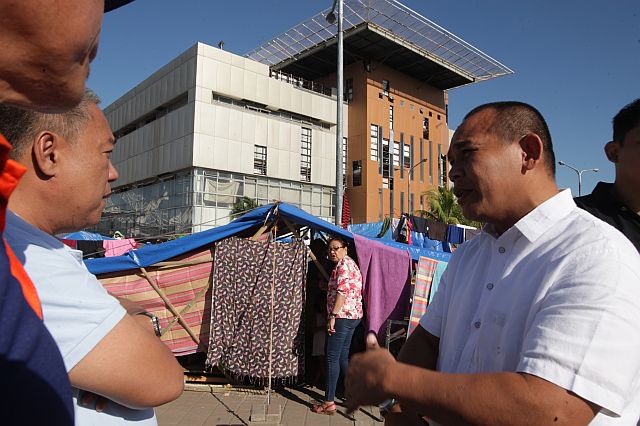 With a child in her arms, two others tugging either side of her tattered shirt, and two more trailing behind her, 23-year-old Shirley Nodalo went around the Cebu International Convention Center (CICC) grounds to look for a shaded place to stay.

The 9 a.m. sun on Monday beat down on the mother of five and her brood while they went from tent to tent asking owners if they could share, but to no avail.

The scorching heat will likely cause her children to be sick, if the situation is left unabated.

In a visit to the evacuation site yesterday, two days after a huge fire left about 11,000 people homeless in Mandaue City, Cebu Governor Hilario Davide III appealed to the private sector to help provide the material needs of the victims.

“If there are businesses and private groups that can help, I am encouraging and asking them to help provide the necessities here,” he said.

Accompanied by Capitol officials including Vice Gov. Agnes Magpale, who was at the site on Sunday,  Davide inspected the sorry state of the evacuees at the CICC grounds yesterday morning.

Many fire victims still huddled on the concrete grounds with just a thin piece of cardboard to protect them from the burning pavement during the day or the cold cement at night.

Davide said the evacuees can stay at the CICC grounds until the re-blocking of the fire site in Barangays Mantuyong and Guizo is completed by the Mandaue City government which, Davide said, is “ preparing for the long haul”  and may need assistance in caring for the victims.

The fire victims are not allowed inside the convention center, which has been declared unsafe after the October 2013 earthquake.

“This center (CICC) wasn’t built to be an evacuation center, but we are using it to help our neighbors because this is an emergency. If you look at the condition inside, it’s dangerous. I don’t want to expose the victims to the risk,”  Governor Davide said.

The governor also declined to comment on whether the provincial government will extend financial assistance to the fire victims, saying he did not want to talk about it yet.

“Let’s allow the (Mandaue) city government to do its job. I’m sure they are prepared,” Davide said.

Provincial Information Officer Ethel Natera, in a phone interview, was optimistic that financial aid will be extended to the fire victims just as the provincial government extended financial assistance to victims of Supertyphoon Yolanda in northern Cebu two years ago.

Natera said the Capitol is capable of providing assistance, but since Mandaue City is taking the lead, the provincial government will have to wait for a request for financial help.

The provincial government, however, is ready to extend assistance for infrastructure and other projects.

The Cebu Provincial Board (PB), in its regular session yesterday, approved a resolution authorizing the governor to release P23 million in financial assistance to various local government units in the province, largely for infrastructure projects in southern and western Cebu.

Last week, the PB also approved a resolution authorizing Davide to release P72 million in financial aid to various municipalities, with Carmen in northern Cebu getting the bulk of the assistance for its road-concreting projects.

Instead of financial assistance for the fire victims, the provincial government sent 39 tents to the CICC grounds yesterday.

An additional 14,000 liters of water will also be delivered by the provincial government to the evacuation site.

Donations continued to pour in for the 2,255 displaced households.

As of Sunday evening, the provincial government received more than 1,200 sacks and packs of assorted goods, 1,000 pieces each of mats and mosquito nets, and at least 14 bags of used clothing.

Felix Suico, head of the Mandaue City Disaster Risk Reduction and Management Office, said the inflow of donations is “good and systematic.”

“We have a receiving area, a drop-off center, where personnel from the provincial government and representatives from Guizo and Mantuyong will accommodate donations,” he told CDN yesterday.

Donors have to course their donations through the provincial government, which will turn over the goods to the Mandaue City Social Welfare Service (CSWS).

Suico said they could still use more tents. He said they were waiting for the tents from the Cebu City government.

In the meantime, the Mandaue City government distributed tarpaulins to the fire victims to protect them from the heat during daytime.

With elections fast approaching, local officials recognized the possibility that candidates may use the tragedy for campaigning.

“Under R.A. 10121 (National Disaster Risk Reduction and Management Act), we can never say no to those who want to extend help,” Cebu Provincial Disaster Office Chief Baltazar Tribunalo Jr. said in a press conference at the CICC yesterday.

Tribunalo said they will still receive donations from local candidates, but the candidates are prohibited from distributing anything inside the evacuation center.

Food packs bearing the image or names of candidates will be repackaged.

Tribunalo stressed that not only is campaigning in the midst of a tragedy prohibited by law, it is also morally wrong.

For victims like Shirley Nodalo, who only managed to save a small  mat and a piece of carton from the fire that destroyed their home in Barangay Mantuyong, any aid is welcome especially that which can help cover her children from the piercing heat of the sun and alleviate hunger pangs.

Last Saturday night, Nodalo’s family slept on the cold pavement outside the CICC. She said they shared a tent with another fire victim, but they left after she realized the owner got easily irritated with her kids around.

Her partner, 27-year-old Nemecio Quiapo, was at the fire site helping his employer rebuild their burnt-down puso (hanging rice) store.

She said they’d buy rice with whatever money he would bring back.

Toward lunchtime, Nodalo received a tarpaulin, one of the many donated by several private institutions in the last two days.

Read Next
Bargamento: No ‘tanim-bala’ case based on CCTV footage