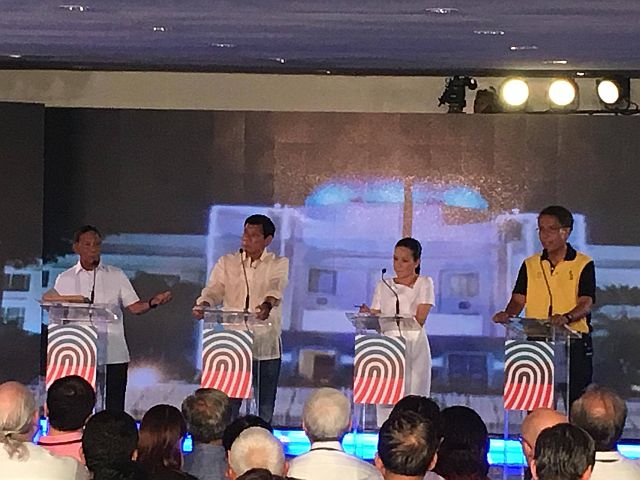 Graft and corruption emerged as the de facto theme in the taut and highly charged second presidential debate at the University of the Philippines Cebu on Sunday.

And the candidates ended up ganging up on a beleaguered Vice President Jejomar Binay, who was put on the hot seat several times during the face-off.

In a highly charged debate, Binay found himself on the defensive end of accusations of dirty deals and transactions during his decades-long stint as the mayor of

Makati City, drawing punches from Sen. Grace Poe who engaged him in a bruising exchange, and Liberal Party’s Mar Roxas.

His rivals questioned his refusal to face corruption allegations in the Senate, challenged his promise to pursue transparency, and needled him to follow the debate rules after he insisted on bringing in notes.

The first shot against Binay was fired after he promised to issue an executive order for freedom of information.

Poe, who spearheaded the FOI bill’s approval in the Senate, was not sold on this.

“We had a lot of questions for you that you were not able to answer in the Senate. How can we believe that you would support this?” said Poe.

Binay said he should be trusted, because he was a man of action. He does what he says, he said.

In apparent jab at Poe, he brought up her renunciation of her Filipino citizenship and her taking of an oath of allegiance to the United States.

“We’re talking about rule of law, but you always say you’re a true Filipino. How can you be called a true Filipino if you swore allegiance [to the United States], and you are ashamed of your origins?” he asked.

To which Poe replied: “How can you say I was ashamed of my being Filipino? You say you are number one in protecting OFWs (Overseas Filipino Workers), and you are saying those who live abroad have no right to (run for president).”

Poe shot back a riposte that elicited a roar of approval from the crowd: “I’m not saying I’m an OFW. I’m saying I am someone who went to another land because she wanted the opportunity for a better life.”

She said it would be better to go abroad to work instead of remaining in the country and steal from the government coffers.

“You speak as if there is already a ruling against me,” Binay said.

Poe retorted: “Did I say that it was you who stole? I did not say it was you.”

Unlike the first debate hosted by the Inquirer and GMA 7 network in Cagayan de Oro City on Feb. 21, the format of the second debate  allowed the candidates to ask each other questions in the second half, guided only by moderator Luchi Cruz Valdez.

Scrambling to pull ahead of the pack in an increasingly tight race, the candidates were a study in contrast as they made their case to voters barely two months before the general elections in May.

Poe also asked Binay if he would issue a waiver on his accounts.

Binay brought out a document that he said was the waiver on his finances. He insisted on showing the waiver, prompting Valdez to insist on the Commission on Elections’ ruling that no documents were allowed.

Roxas jumped in and said the rules must be followed. Binay could show the document outside the debate, he said.

Binay, asked about cases against him, said that he had not been convicted of any charges so he could not be called corrupt. But if convicted, he would abide by the court’s ruling. “We must be a government with the rule of law,” he said.

Poe then remarked that there are also rules that must be followed in the debate and brought up once more Binay’s refusal to face the Senate.

“It’s important that he attend the Senate so he could explain if he has nothing to hide,” she said.

Duterte said that if a case would be filed against him, he would withdraw from the presidency.

Binay said Duterte’s premise was those who committed wrongdoing should back out from the race, but he said he has no reason to do so because he did no such thing.

Roxas, the chosen successor of President Aquino, found himself defending the administration on allegations of corruption and selective justice.  He repeated familiar lines about his intent to build on the President’s signature policies and his legacy of honest governance.

“I’m not saying we’ve reached paradise, but we have come a long way and you cannot deny that,” he declared.

But that line of reasoning opened up an opportunity for his rivals to pounce.

Roxas noted, however, that criminal or administrative charges had been filed against politicians “whether LP or non-LP.”

But Poe challenged that statement, saying she wondered about the case of Transportation Secretary Joseph Emilio Abaya, the ruling party’s president, and the controversial Metro Rail Transit maintenance contract with Sumitomo APT Global.

“The fact of the matter is if you’re LP and you’re not important you will face charges. But if they need you, you won’t face cases,” she said.

Roxas said: “Are you accusing the Ombudsman of playing favorites?”

Roxas then cited the plaudits received by the Aquino government from the World Bank, Transparency International, and the World Economic Forum towards eradicating graft and corruption.

“We will put these thieves behind bar,” he said.

At this point, Binay chimed in: “Mr. Roxas, the poor continue to be poor. Millions are still poor. Do not say you have done well. You can’t say ‘walang corrupt, walang mahirap,’ because there are people who remain poor.”

He alluded to the sketchy background of some of Roxas’s friends, naming mining businessman Eric Gutierrez, who was reported to be the owner of the private planes Roxas was leasing for his campaign.

The moderator cut in, saying Binay was not allowed to bring up people who would not have the chance to defend themselves.

Binay said: “Then what about the mention of my son?” referring to dismissed Makati Mayor Junjun Binay.

This allowed Roxas to make the parting shot: “The difference is that these people do not have cases. Your family is facing cases.”

“There you have it,” Binay said with a note of triumph in his voice. “Charges do not mean conviction.”

During the face-off portion where candidates asked fellow candidates questions, Roxas gave Binay the chance to explain the corruption charges against him.

Binay, instead, accused Roxas of being part of the plot to discredit him through “demolition by perception.”

“Corruption is a criminal offense but you cannot say one is guilty without a ruling from the court,” Binay said.

He said accusations without basis were thrown at him and the Commission on Audit, which had adverse findings against him, was not a court.