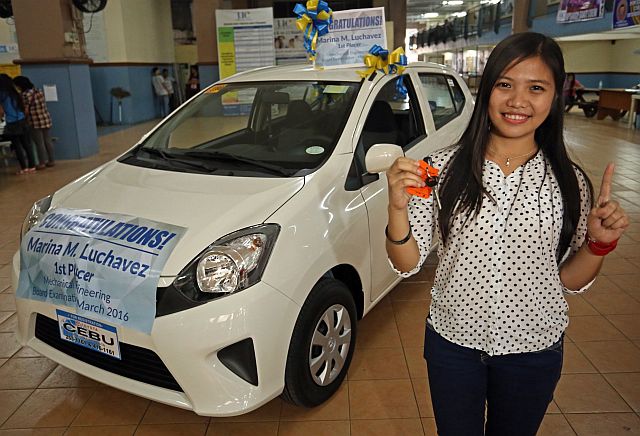 Mechanical Engineering Licensure Examination 1st placer Marina Luchavez shows off her car keys for the Toyota Wigo she received as a reward from Augusto Go, the president of her alma mater Uinversity of Cebu. (CDN PHOTO/LITO TECSON)

MARINA Luchavez, 22, gladly accepted yesterday a brand new car from the management of the University of Cebu (UC) as her reward for topping the March 2016 Mechanical Engineer Licensure Examination (MELE).

Accompanied by her mother, Luchavez was all smiles when she received the key for her white Toyota Wigo from UC Chancellor Candice Gotianuy, witnessed by UC President-owner Augusto Go.

Luchavez, who hails from Consolacion town, is the girlfriend of the September 2015 MELE first placer Micah Arceño, also a graduate of UC who was given a Toyota Sedan when he topped the exam last year.

Because of their rare feats, the photos of Luchavez and Arceño with hashtag #relationshipgoals went viral yesterday.

But Arceño was not around when Luchavez claimed her new car at 3 p.m. at the UC campus yesterday as he was attending his work.

Go displayed at the UC main quadrangle the two Toyota Wigo cars – red and white – for Luchavez and her mentor-instructor to choose from.

Luchavez decided on the white car, leaving the red one to the instructor.

Go and Gotianuy separately announced yesterday morning their decision to give away two cars to the first placer and to the mentor-instructor.

Gotianuy, in her Facebook post, was very ecstatic about the news and even posted the link of the CDN’s story on the three UC students who landed on the top ten of the 2016 MELE.

“We’re giving away 2 cars! 1st place, 2nd place and 4th placer- It’s a grand slam for the University of Cebu in the March 2016 Mechanical Engineering Licensure Exams,” she posted.

In the last part of her post, she stated: “Excellence is getting to be a habit in UC.”

Go said it has been the policy of the university to give a new car for its graduates who topped licensure examinations. Because teachers have a big role in this achievement, Go said, the teacher who served as mentor also deserved to get a new car.

“I’m very proud of this achievement. That’s why, we are giving out two cars. As they said, the more you give, the more you receive,” Go said.