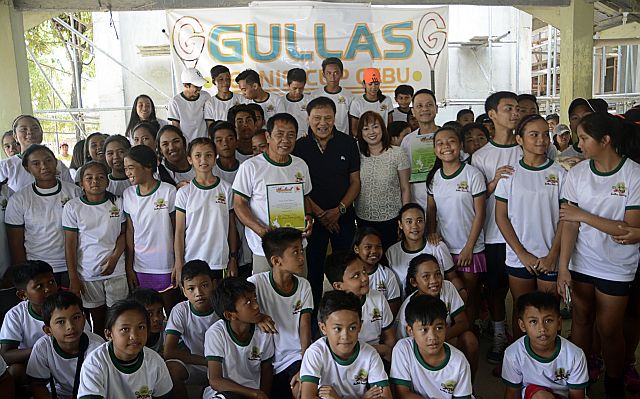 Organizers and participants of the JRG Gullas Tennis Cup gather before the start of the tournament at the Consolacion Tennis Club in Consolacion town, north Cebu. (CDN PHOTO/CHRISTIAN MANINGO)

TWENTY-ONE years can mean a lot, especially when organizing a sports league.

So for Cebuano sportsman and philanthropist Jose “Dodong” Gullas, yesterday was the right time to pay tribute to John Pages and Fritz Tabura, who are key figures in the JRG Gullas Tennis Cup.

Both were honored yesterday at the Consolacion Tennis Club in Barangay Laray, Consolacion, during the start of the 21st season of the tennis tournament.

“Having this event for 21 years already is not an easy thing to do. Without Mr. John Pages and coach Fritz, we would not have reached this far. To them, I am deeply grateful,” said Gullas.

Gullas, along with Pages and Tabura, are responsible for this tennis grassroots program that is part of their advocacy against illegal drugs.

As tennis action kicked off yesterday, Gullas did not fail to remind his three important points to the present pack of netters: never forget their studies, to stay away from the evil of drugs and to be prayerful at all times.

Pages, the former Sportswriters Association of Cebu (SAC) president, was deeply touched by the simple but meaningful engraved plaque given to him and Tabura.

He was nostalgic to say that it was one sunny afternoon in early 1995 at the Cebu Country Club when Gullas pitched an idea on putting up a developmental league for aspiring tennis players. That led to the establishment of the current tennis cup.

Now, the Gullas Cup is one of the top junior tennis tournaments in the Vis-Min area. It is the first event to garner a Group 2 ranking by the Philippine Tennis Association (PhilTa).

Read Next
NOT GIVING UP YET