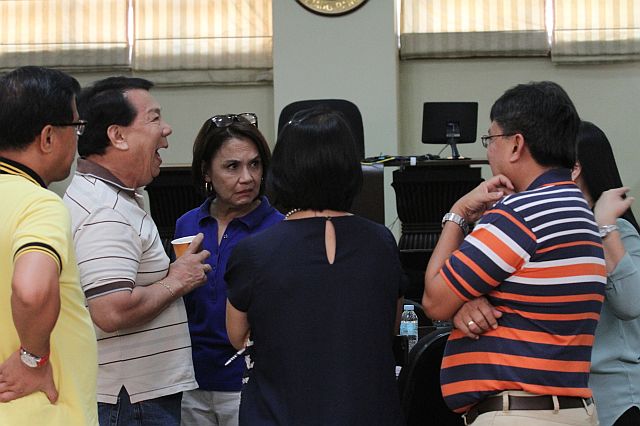 CEBU CITY Councilor Margot Osmeña (3rd from left), committee on budget and finance chair, passes the time with (L-R) Councilors Alvin Dizon, Sisinio Andales, Nida Cabrera, Alvin Arcilla and Lea Japson as they await the arrival of other councilors to start the budget hearing. The hearing was cancelled due to lack of quorum. (CDN PHOTO/JUNJIE MENDOZA)

FOR the third time, a lack of quorum forced the Cebu City Council to cancel deliberations on the revised P9.8-billion annual budget for 2016.

Councilor Margarita Osmeña, chair of the budget and finance committee, said she was planning to propose a resolution seeking to forego the budget hearings and just ask the Local Finance Committee (LFC) to submit some documents to her committee for consideration.

The resolution will be introduced during the council’s regular session on Wednesday next week.

Only seven councilors, all from the majority bloc, were present during the budget hearing scheduled at 2 p.m. yesterday. Two more were needed to achieve a quorum.

Vice Mayor Edgardo Labella and Councilor Noel Wenceslao came in about 30 minutes late, after the others decided to cancel the hearing.

“They didn’t show up. I can reschedule but nobody’s listening. That’s why I want to do it in the session because everyone’s there,” Councilor Osmeña said.

“We could be campaigning, but we have to do our job,” she added.

Among the documents being sought by Osmeña is the list of maintenance and other operating expenses (MOOE) worth P3.4 billion, which have been included in the P5-billion reenacted budget that City Hall is using after the approved P6.4-billion annual budget was rendered inoperative by the Department of Budget and Management (DBM) 7.

“They told us what’s not there. But we want to see what they think are essential and what was made part of what we’re using now,” she said.

Osmeña said they also need the 2015 financial statement showing, among others, the city’s actual income and expenses as well as the letter from the Land Bank of the Philippines (LBP) that allegedly demanded that the city government pay off the city’s outstanding balance for the South Road Properties (SRP) loan, which the executive department has been pushing for and has included in its budget proposal.

Other documents being requested are the plans for a P50-million medium-rise building; a letter as basis for the supply request for day-care workers and senior citizens; guidelines for the proposed P170-million educational assistance program; and Department of Public Works and Highways (DPWH) approval of the city’s Colon Revitalization Program.

Osmeña is also asking the executive department to submit its Gender and Development (GAD) Plan and point out which part of the proposed budget the items under the plan have been placed. The GAD Plan was also pointed out by DBM-7 as part of the documents lacking in the city’s earlier approved annual budget.

Lastly, Osmeña is asking the LFC to point out where in the proposed budget the P561.5-million Peace and Order Plan and Public Safety Plan items have been placed.

In previous budget hearings, the council had started discussing the sources of funds for the revised budget as well as some of the items added in the proposal which were not included in the previously approved budget.

Sought for comment on the absence of some councilors, presiding officer Labella said they can be made liable after the 90-day period given to the city council to act on the revised budget lapses.

As of now, he said a reminder will be sent to all councilors to be present during the next budget hearings.