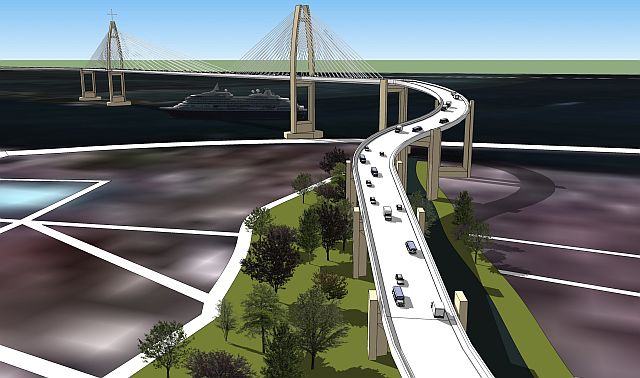 This is an architect’s rendering of the proposed Cebu-Cordova Bridge.

Two major infrastructure projects are expected not only to drive tourism arrival growth but also encourage more developers to undertake city or resort hotels in Cebu.

He said some of their clients who are planning to undertake resort developments in areas that can be reached through Cebu have taken the airport project under consideration.

The new bridge, which will be undertaken by the Pangilinan-led Metro Pacific Tollways Development Corp., will change Cebu’s landscape and ease traffic flow in Metro Cebu.

Although there has been a surge in hotel developments in Cebu, Guevara said hotel operators can still find opportunities in central business districts.

“There is a great demand for hotels in Cebu, considering that it is the jump-off point to Visayas and Mindanao destinations,” Guevara said in a real estate forum organized by Colliers on Wednesday.

Ongoing hotel developments in Metro Cebu include the Savoy Hotel and Belmont Luxury Hotel at The Mactan Newtown township in Lapu-Lapu City; Sheraton Cebu Mactan Resort and The Residences at Sheraton also in Mactan; and the expansion of Golden Prince Hotel in Cebu City.

These developments will provide more than 1,500 additional rooms from 2016 to 2020, Guevara said.

Cebu, Lapu-Lapu and Mandaue cities currently have 10,747 rooms, with an average occupancy rate of 64 percent. Cebu City has the most number of rooms at 6,795 rooms, followed by Lapu-Lapu City with 3,537 rooms and Mandaue with 415 rooms.

Guevara said the Savoy Hotel, an 18-story condotel with first-rate amenities and services, is currently the most expensive condominium unit in Cebu with a price of more than P200,000 per square meter.

In the same forum, Guevara encouraged developers looking to undertake either vertical or horizontal residential projects to position these towards the leisure market because of a slowdown in the take-up rates for both segments.

Among the projects that Guevara suggested are condotels and serviced residences.

The MCIA upgrading project, which is being undertaken by concessionaire GMR-Megawide Cebu Airport Corp., entails the construction of a new passenger terminal and renovation of the old one to bring the airport’s capacity to 12.5 million in 2018 from the current 4.5 million.

The bridge project, meanwhile, will link mainland Cebu to Mactan Island through Cordova town. Construction of the 8.25-kilometer toll facility is targeted to start in 2017 or early 2018.