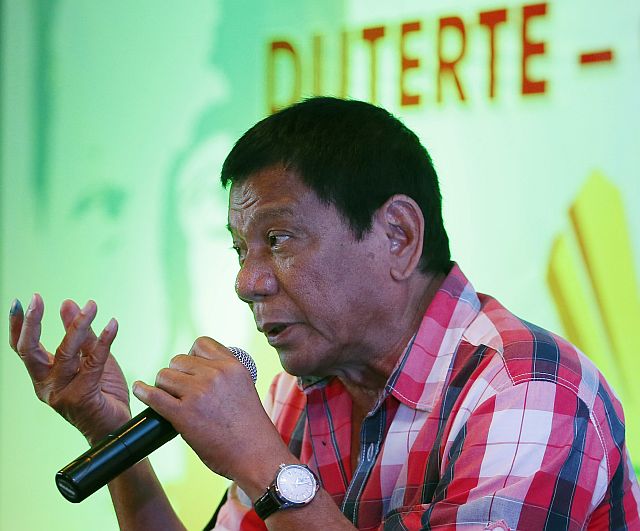 Davao City — Despite strong opposition from the Catholic Church, presumptive President-elect Rodrigo Duterte on Sunday said he would push for family planning, saying the Church’s beliefs were no longer relevant.

“It will do us good. Mas maraming magawa ‘yan, walang kasamaan ‘yan (It will accomplish many things, it won’t do any harm). Ako naman, I said, I am a Christian but I am a realist and we have to do something about overpopulation,” Duterte told reporters.

He said he might offend the religious sector with his statements but he said their “fundamental beliefs do not solve the problem of our country anymore.”

“I take the opposite view; I defy the opinion or the belief of the Church,” he said.

He said the scriptures in the Bible cited by his critics were no longer relevant to society.

“The ideas there (were) written 2000 years ago and it does not relate or find relevance to our society,” he said.

“I don’t give much importance to the spiritual; walang maitutulong iyan, sa totoo lang (It won’t help, to tell you the truth). What you should worry about is how you suffer here on this planet. You do not worry about suffering after you make the exit,” he added.

Earlier, Duterte said that he believes in God but not necessarily in religion.

“The best thing is just to prepare and pray to God when you are alone and in a quiet room,” he said.

“I have this deep and abiding faith in God. But this does not mean that you have to have a religion or follow somebody,” he added.

Duterte said the family planning program of the government is not moving forward because the country’s leaders always refer to the beliefs of the Catholic Church.

“It (family planning) is not moving because the President has referred always to the stand of the Roman Catholic Church,” he said, adding that politicians were afraid.

He said in Davao City, family planning is “vigorously implemented,” where free contraceptives were given.
Catholic Church hit

He cited the bishops embroiled in a controversy during the Arroyo administration who were reported to have received Mitsubishi Pajeros from the administration.

“’Yung mga tao dito sa Pilipinas walang makain, walang medisina (while) you were enjoying the money of the god**** people of the Philippines.

P***** i** kayo! ‘Di na kayo nahiya niyan? Tapos kung magsalita kayo, akala niyo kung sino (The Filipinos don’t have anything to eat and have no medicines (while) you were enjoying the money of the god**** people of the Philippines. [expletive] Aren’t you ashamed of yourselves? And who do you think you are when you speak)?” he said.

Read Next
Brace for another traffic experiment