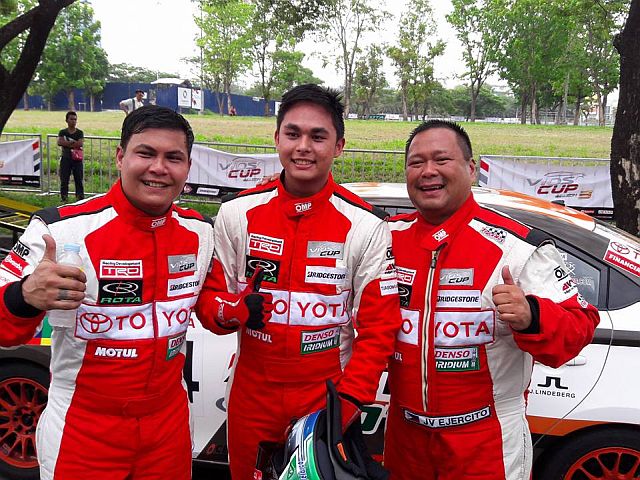 The unflappable Sean Velasco of Team Toyota Cebu raised Cebu’s banner up high as he won the Sporting Class title in the second leg of the Vios Cup Season 3 held last weekend at the Filinvest Street Circuit at the Filinvest City, in Muntinlupa City.

Ever the cool customer, the 21-year old Aviation student was a picture of calm, cool confidence as he navigated the narrow track and claim the checkered flag in both Race 1 and 2 in convincing fashion. Velasco took pole position in Race 1 after qualifying race leader Sam Yg encountered some trouble with his vehicle.

With the golden opportunity placed before him, Velasco got off to a good start and eventually won, finishing the first race with a time of 16 minutes, 26.190 seconds, a good 12 seconds ahead of second placer Miko Maristela.

Race 2 was a lot tougher as Maristela pushed the pace from the get-go. However, Velasco kept his cool and cruised to the checkered flag in 16:26.190.
Afterwards, Velasco claimed that flying a plane had far less pressure than competing in the Vios Cup.

“With the plane, I can only say that the only pressure that exists is the pressure from the altitude. Driving has more pressure than flying a plane but the formula for winning was to be calm and relaxed,” said Velasco, who is diligently studying to become a commercial airline pilot at the Airworks

Aviation Flying Academy. “I just had to get a good start and I had to keep myself calm throughout the race without pushing the car to its limits so I could bring the car home without any damage.”

Velasco shared with Cebu Daily News that he didn’t expect much heading to the race especially since he wasn’t able to practice at the course. He instead leaned on the advice of his team headed by his dad John, his driving coach Lord Seno and team engineers Jun Cabrera and Mark Laxa to pull off the feat.

Seno lauded his young ward for executing their game plan to perfection.

“He was fastest in practice. With such a narrow track making overtaking almost impossible, so qualifying on top was very important,” added Seno, an accomplished driver himself who won titles in the Vios Cup last year and finished ninth and eighth in Races 1 and 2, respectively, in the Sporting class.

In all, Team Toyota Cebu has been on a roll, winning six races out of the last 12 they’ve joined.

The team has also been a consistent podium finisher in all 12 races it has joined.

The rest of Team Cebu also had some measure of success during the second leg. Jette Calderon was ninth in Race 1 and 10th in Race 2 in the Super

Sporting Class while Bobby Pangilinan was 3rd and 2nd in Races 1 and 2 in the Promotional class.

However, Oscar Suarez was not allowed to continue due to a heavy crash in practice.