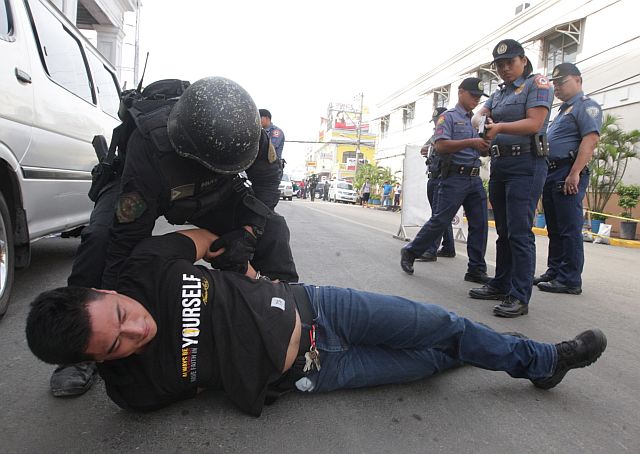 The Cebu City Police Office (CCPO) staged a simulation exercise to test the readiness of its policemen and operatives in responding to crime incidents yesterday.

The simulation started at robbing a lending firm in Panganiban Street in Barangay Pahina Central and ended with the arrest of the suspects at a checkpoint along P. Burgos Street, near Cebu City Hall.

P. Burgos Street was found to be a strategic escape route for suspects. The simulation was to ensure arrest of the suspects by the blocking force from the different police stations in the city.

After the simulation, some areas that need improvement were noted, such as the communication facilities, proper use of communication devices and the individual role of police officers.

Overall, the simulation was satisfactory and was done in less than an hour.

“At least naa tay (we have) preparation, kay wala man ta kabalo kung kanus-a jud ni mahitabo, at least naka-mind-set na sa ato-a (because we don’t know when will it happen, at least we instill in our minds the simulation exercise),” said Gabuya.

Proper approach to armed suspects and manner of arresting suspects were also practiced during the simulation.