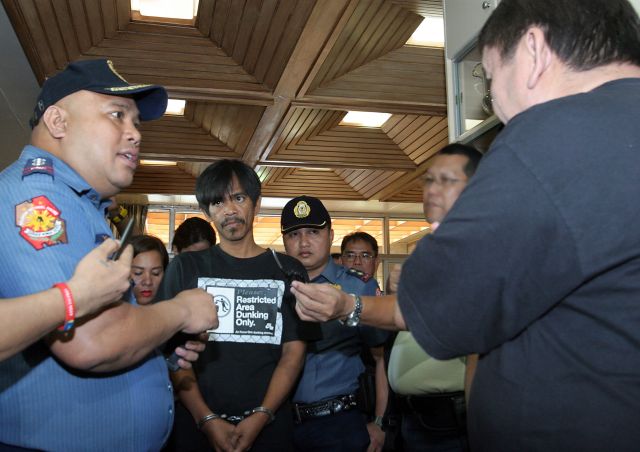 Cebu City policemen arrested last Tuesday the alleged mastermind in the ambush of a Baptist Church pastor who actively campaigned against illegal drugs.

Gary Daclan was identified by witnesses as the primary suspect in the murder of Crisostomo Maternal Jr., an evangelist of a mission church in the mountain village of Bonbon in Cebu City.

His girlfriend and brother were also arrested on Monday for selling illegal drugs.

Daclan admitted his involvement in the slay plot, saying drug dealers in the area misconstrued the pastor as telling police about their illegal drug operations.

“Sige man siya (Maternal) og kuyog sa army. Nahadlok mi nga basin iya unya mi nga ipadakop. (I always saw him going with soldiers. We were anxious that he might have asked the soldiers to arrest us),” he told reporters.

Days before his death, Maternal was with soldiers in barangay Bonbon to take part in the Brigada Eskwela, a project of the Department of Education (DepEd) where volunteers help prepare and clean school buildings before the school opening.

Daclan said he contacted their drug group leader who is behind bars at the New Bilibid Prison in Muntinlupa, Philippines.

“Niingon ang among amo nga ipatrabaho niya si pastor so nangita ko og sa gunman. (Our boss told me to have pastor killed so I looked for a gunman),” he said shortly after he was presented by police to Cebu City Mayor-elect Tomas Osmeña.

Daclan said he paid P30,000 to the assassin who along with the driver of the getaway motorcycle remain at large.

Supt. George Ylanan, deputy director for operations of the Cebu City Police Office, said they are going after the two other suspects whose identity he didn’t divulge.

“This is actually an isolated case of anti-drug advocates getting killed. But I must admit that having that kind of campaign is actually risky just like what we policemen do,” he said.

Ylanan advised anti-drug crusaders to closely coordinate with policemen to ensure their safety.

Murder charges will be filed against Daclan, the gunman, and the driver of the getaway motorcycle, Cebu City Police Office Director Benjamin Santos Jr. said.

Upon learning about Maternal’s death, Santos said they conducted a sweep of the area and arrested Daclan’s girlfriend and brother.

Daclan eluded arrest last Monday but he was caught by police the following day.

“When Daclan was arrested, inamin naman niya. (He admitted his participation in the crime,” Santos said.

The plan to kill the victim, the police chief said, was actually hatched by Daclan after he saw Maternal talked with soldiers in Barangay Bonbon.

He said Daclan is a level 2 drug pusher who can dispose of at least 200 grams of shabu in a week.

“Drug peddlers in Bonbon were terrified when they saw the presence of soldiers in their place. They are used to seeing military personnel in the place,” he said.

Osmeña was elated with the arrest of Daclan but said he won’t give any financial assistance to the arresting policemen.

“We have captured the mastermind. But there will be no (cash assistance for now). Buhi man sya. Nagtindog pa sya.

Wala siyay garas, ayaw na lang oy. (He’s alive. He’s still standing up. He doesn’t even have a scratch on his body),” he added.

Maternal was one of the leaders of the Bando Osmeña-Pundok Kauswagan (BO-PK) who campaigned hard for Osmeña in the last elections.

Former Bogo mayor, 6 others convicted of graft, malversation of funds