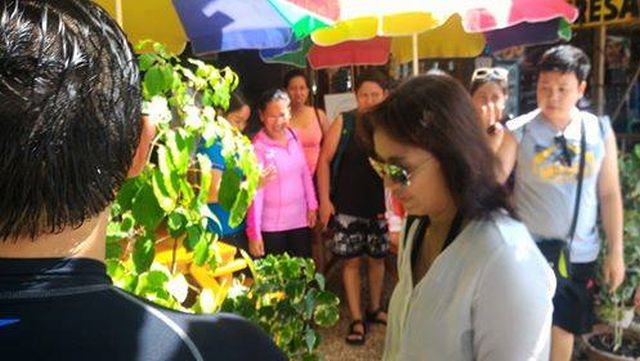 LESS than two weeks before she officially assumes the second highest post in the country, Camarines Sur Rep. Leni Robredo decided to take a time off with her family.

She quietly flew to Bohol on Monday with her daughters Aika, Tricia and Jillian for a four-day vacation.
They were accompanied by some relatives, said a source close to Robredo who asked not to be named since he was not authorized to talk.

“It’s really a ‘me’ time with her family,” the source told the Inquirer in a phone interview.

He declined to disclose where the family was staying as Robredo or her staff members didn’t even coordinate with the local police or elective officials.

On Tuesday, the family crossed to Cebu Island and went to the southern town of Oslob to enjoy the whale shark watching, which is a tourist attraction there.

From Oslob, they returned to Bohol, this time on Balicasag Island – a known diving destination.

PO3 Albert Almario of the Oslob Tourist Police Assistance Desk said Robredo was with her family when she arrived at the whale shark site in Barangay Tan-awan, Oslob about 124.3 kilometers south of Cebu City.

Almario said the group arrived at 9 a.m. and boarded a paddle boat that brought them where the whale sharks were being fed.

Almario said the group didn’t stay long and proceeded to Tumalog Falls, another tourist attraction in Oslob, before boarding a motorized boat at 10:30 a.m. that took them back to a resort on Panglao Island, Bohol.

A local resort owner there told the Inquirer that it was the same boat that took Robredo and her children to Oslob from Panglao Island, which was two hours away. She left Oslob at past 10:30 a.m.

In the evening, the Robredos were scheduled to have dinner at Tarsier Botanica where local officials from Liberal Party (LP) including Gov. Edgar Chatto were expected to join her.

On Wednesday, she and her children were scheduled to visit Bohol’s famous tourist spots like the Loboc River Cruise, Chocolate Hills and Baclayon Church.

The source close to Robredo said the four-day trip was her time off after the elections and to bond with her daughters before the start of classes and of her term as Vice President.

“She hardly went home (during the campaign period)… It’s their sort of family reunion,” the source said.

Leni was scheduled to go to Cebu City on June 28 to administer the oath of Cebu City Mayor-elect Tomas Osmeña, a good friend of her husband, Interior Secretary Jesse Robredo who died of plane crash in Masbate in August 2012.

She would also join in several activities on that day, including the Thanksgiving Mass with Gov. Hilario Davide III of the Liberal Party.

Robredo won in Cebu and Bohol provinces in the vice presidential race.