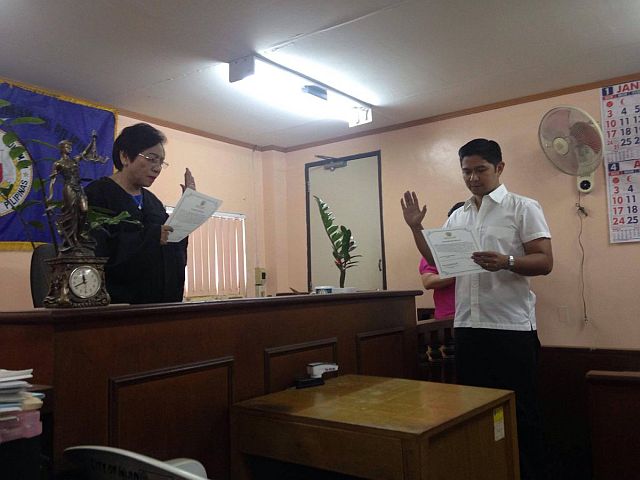 Cebu Sixth district Provincial Board Member-elect Thadeo Jovito “Jonkie” Ouano said he decided to take oath before Judge Galanida because she is a family friend and he wanted to have a simple oath taking ceremony. (CDN PHOTO/JULIT C. JAINAR)

Ouano said that he took oath before Judge Galanida because Galanida is their family friend and he wanted to have a simple oath taking ceremony.

Ouano said that even if he belongs to another party, he would still support the programs of the government as long as it is for the progress of Cebu province.

“I myself went to Governor Junjun Davide and Vice Governor Agnes Magpale to assure them of my 100 cooperation and support to their programs as long as it is for the development of Cebu Province”, Ouano said.
Re-electionist councilor Basiga said that he is still willing to support the projects of the incoming mayor Luis Gabriel “Luigi” Quisumbing of Liberal Party.

“Mana man ang eleksyon kun unsay kaayohan alang sa katawhan, ako willing ko mo supporta”, Basiga said.(The election is already done, I am willing to support whatever projects as long as it is for the good of the people)

Sanchez also assured that they will work with the other members of the council even if they are from different political parties.

As a professor of Cebu Doctors University, Sanchez hopes that the chairmanship for the committee on education will be given to him, while the committee for sports for Cabahug who is a Philippine Basketball Association (PBA) legend.

Also present during the oath taking ceremony were the relatives and friends of the newly elected officials.

Emmarie “Lolypop” Ouano-Dizon, who also ran as mayor under One Cebu and sister of Councilor Ouano, also witnessed the oath taking.

Councilors from One Cebu are also willing to witness the oath taking of Quisumbing and other councilors of LP this June 30 at the session hall of Mandaue City Hall.

It was earlier reported that Quisumbing extended the invitation to the three members of One Cebu and was hoping that they will be present during the oath taking ceremony.

“Dako sad kaayo ng garbo namo nga imbetaron mi og ingon ana kay who are we to decline even if we came from different political parties, at the end of the day humana ang election”, Sanchez said.

Read Next
Tumulak takes oath ahead of Team Rama allies