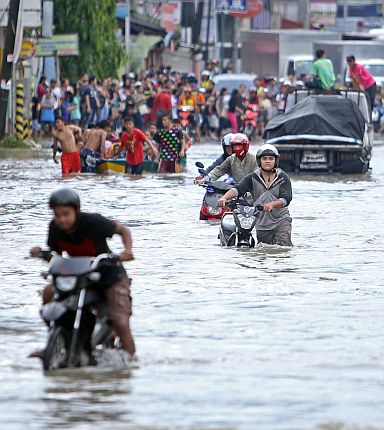 Floods in major streets in Metro Cebu, like this area along A.S. Fortuna Street in Mandaue City after heavy rains last July 2, have worried business leaders, who warned of dire consequences if these will not be addressed. (CDN PHOTO/LITO TECSON)

The new administration’s plan to implement a 24/7 work schedule on major infrastructure projects in the country will benefit Cebu in terms of the fast tracking of the needed projects that can address traffic and flooding here.

For Cebu businesses, better flow of traffic and lesser or no flooded areas will mean better business efficiency and better delivery of goods and services.

Ng said the organization welcomed this move to fast track infrastructure development because it would be very good for Cebu.

“We hope this will be the impetus (that) we desperately need for the much needed projects to be done here in Cebu to address traffic and flooding,” she said in a text message.

Heavy rains over Metro Cebu last week caused massive flooding and traffic gridlocks in Mandaue City and Cebu City, alarming business leaders of their proportion and prompting them to warn the public sector to address the problems or suffer worse consequences later.

An Inquirer report quoted Budget Secretary Benjamin Diokno telling reporters in Manila on Tuesday that the proposal was already brought to the attention of President Rodrigo Duterte and that he was fine with it.

Diokno added that public-private partnership (PPP) projects and “all major projects” worth over P10 million would be prioritized.

The budget chief admitted that this would entail higher expenses, but he emphasized that there are already advanced technologies that can be used to lessen public inconvenience such as one that would reduce noise.

This is in line with the Duterte administration’s thrust to speed up construction of infrastructure projects and increase budget spending, with underspending being one of the major issues raised during the term of former president Benigno Aquino III.

Ng said the national government’s move to hasten construction works may push the project developer to fasttrack the airport development, but she said she knows they are “way advance in the deadline.”

“The PPP concessionaire is very meticulous. They make sure everything is done to fasttrack the project,” she said.

Ng, an outgoing member of the MCIA Authority Board of Directors, said that they are working under close coordination with GMCAC.

GMCAC earlier announced that they are on track with their June 2018 completion date, but Ng said this may even be pushed earlier if the proposal of the national government pushes through.

Mandaue Chamber of Commerce and Industry (MCCI) president Glenn Soco, on the other hand, said the move is very good for the development of Cebu as it will promote business and tourism in the province.

He emphasized the need for a bigger budget and more equitable share of government programs in order to spur growth in Cebu and the region, especially in the countryside.

“Some of these infrastructure projects like the ones which address flooding and traffic need immediate implementation,” he said.

If all these will be realized, he said they can expect more local investments coming in and local businesses including micro, small and medium enterprises will thrive.

Gordon Alan “Dondi” Joseph, president of the Cebu Business Club, meanwhile, said this was “an excellent and badly needed directive.”

“The medium-term benefits to traffic, business and quality of life will far outweigh the short-term inconvenience,” he said.