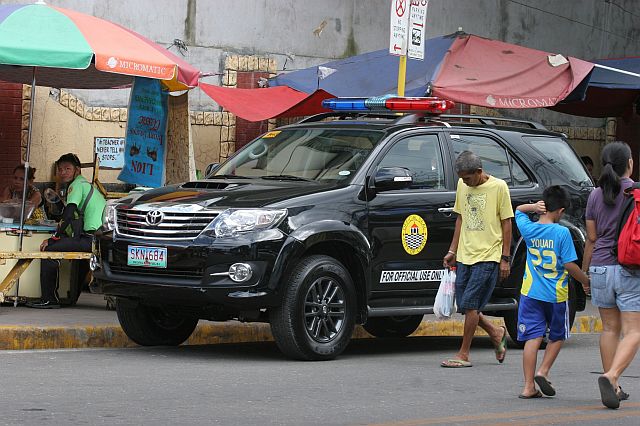 This Sports Utility Vehicle (SUV) being used as a patrol car is one of the 28 vehicles given by former Mayor Michael Rama, which the city may order recalled. (CDN FILE PHOTO)

Cebu City Mayor Tomas Osmeña will recall some of the vehicles issued by the city government to the police.

Interviewed over DyHP, the mayor said the Philippine National Police (PNP) have issued vehicles to the police, particularly to the Cebu City Police Office.

“Akong bawi-on ang uban. Ako ipa-recall, ngano man dili? (I’ll take back some of the vehicles, why not?),” Osmeña said.

He said the national government should also support the police.

“Kinahanglan motabang ang national oy. Ngano man kita ra? (The national government should also help. Why should it be just us?),” he said.

He said the reason why he plans to recall the city-issued vehicles is because of the new vehicles given by the national government to the police.

Last May, former Cebu City Mayor Michael Rama issued 28 vehciles to CCPO, which were distributed to the 11 police stations in the city and used as patrol cars.

But even before Osmeña could issue a recall order, CCPO returned some of their city-owned issued vehicles to General Service Office (GSO).

Malacora said that as of Thursday, the mayor had not issued any memorandum recalling the vehicles issued by the city to the police.

He added that the two Fortuners were issued to Supt. George Ylanan and Supt. Artemio Recabo as deputy assistant of then CCPO director Sen. Supt. Benjamin Santos while the Montero was issued to the city director.

“Natransfer naman sila mao guro giuli nila. Pwede ra gud i-inherit sa nagsunod. Pero duna man siyay mga pronouncement nga kaning mga bago nga dili makadawat. Maikog siguro na, sila nalang nag-uli ra pud (They probably returned it because they have already been transferred. The new appointees could have inherited the vehicles, but Osmeña had made an earlier pronouncement that the new appointees would not get anything from the city government. Maybe they felt embarrassed that’s why they returned the vehicles),” he said.

Malacora said there are still 50 firearms owned by the city that have not yet been returned.

He said some policemen were not yet served with the memorandum order recalling their firearms.

Some city government employees and former and incumbent councilors also have to return the firearms issued to them.

Councilor Dave Tumulak said that last year, the council appropriated P28 million for the procurement of firearms and bulletproof vests for the CCPO.

Senior Supt. Joel Doria, CCPO director, said he will just comply with the directives of the Cebu City government.

“The instruction was for us to return the vehicles, so we just followed it,” he said.

Asked how the city police will be affected by the return of the police vehicles, Doria said,

“Magtrabaho pa rin tayo. (We will continue to work.) Whatever the instructions are, we will follow.”

Doria said he intends to meet with Mayor Tomas Osmeña but for now he’s yet to hear from the mayor if the latter would allow him to pay a courtesy call.

Tumulak, chairman of Council’s Committee on Peace and Order, said the previous council approved and alloted the budget intended for the city police office.

“Partly in terms of responding to alarms, it will really affect. In times of emergency, it is necessary that policemen have mobility,” he said.

Under the 2015 Peace and Order Program budget, Tumulak said the city procured motor vehicles: 4 Monteros worth P6.2 million, 10 Fortuners worth P15 million and 18 Adventures worth P21.6 million.
“Hangyo lang ko ni mayor, ayaw lang kuwai og sakyanan ang police. (I am requesting the mayor not to take the vehicles away from the police.) That budget was intended for the use of PNP for maintaining peace and order in the city,” he said.