BRT project phases for bidding within third quarter of the year 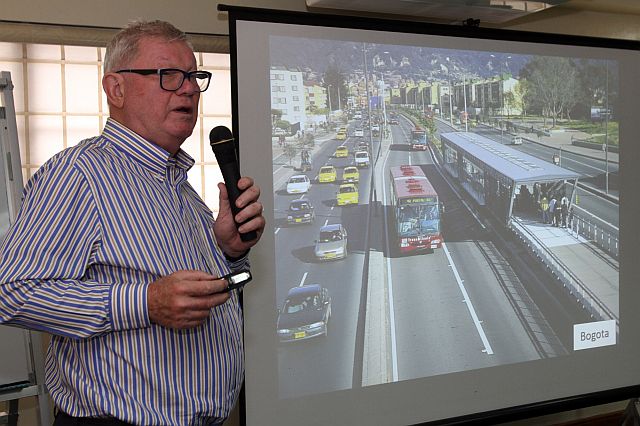 Dr. Douglas Webster, a professor of East Asian Urbanization in the School of Geographical Sciences and Urban Planning at the Arizona State University, said the city has very narrow roads while the widest arteries are not even wide enough to accommodate the system.

“You can’t take a car lane away on the roads I see here,” he said during a round table discussion on sustainable urban development in an increasingly globalized society at the Ramon Aboitiz Foundation-Eduardo Aboitiz Development Studies Center (RAFI-EADSC) Friday afternoon.

But lawyer Rafael Yap, project manager of the Cebu Rapid Bus Transit Project Implementation Unit said that while there are challenges in implementing the BRT project, they are also preparing their response to answer those challenges.

“We are pretty confident that we did our homework,” Yap told Cebu Daily News.

Present during the discussion were around 30 representatives of the public and private sectors, civil society and the academe.

In the morning, Webster gave a similar lecture to students of the University of San Carlos-School of Architecture, Fine Arts and Design.

The educator is a founding professor of both the Schools of Sustainability and Global Studies at ASU as well as a World Bank adviser on urbanization in China, the Philippines, Vietnam, and Thailand.

Webster admitted that he knew practically nothing about Cebu, so he could not give a definite answer when asked what the best transport scheme for the area should be.

Roads need to be at least seven lanes to accommodate the BRT system, but thoroughfares in the metropolitan are only four to six lanes wide.

In lieu of a BRT system, Webster said Cebu can have an elevated or underground Light Rail Transit (LRT) system like the one in Manila.

“I suggest going above ground since it is cheaper,” he said.

He also said that urban planners in Cebu shouldn’t rule out a heavy rail system, as Manila made a mistake when it adopted an LRT system.
With over 5 million people living here, he said Cebu could use a heavy rail system at its core.

However, he cautioned that it shouldn’t span farther than 30 kilometers in both directions since too many stations will be a problem.
A cheaper way to approach the situation, he added, is to start with a BRT then upgrade to an LRT.

According to Yap, there are two construction packages for busways in Osmeña Boulevard and the South Road Properties to include road construction to accommodate heavier buses which will be bidded out this quarter.

They are looking at January or February next year to start the construction of the busways.

Webster, meanwhile, said there are many institutions that are willing to finance these projects and that proponents should have to package it right to attract investors.

Phase one construction of the World Bank-funded P10.6-billion BRT project is expected to start in the last quarter of 2016 or first quarter of 2017.
Construction will begin at Osmeña Boulevard, specifically from the Cebu Provincial Capitol until the junction at P. Del Rosario Street.

Friday’s discussion at the RAFI-EADSC was anchored on Mega Cebu’s roadmap study for sustainable urban development in Metro Cebu.

The Mega Cebu platform is a consortium of government, private and civil society sector stakeholders that envisions sustained urban growth in Metro Cebu up to 2050.

At the heart of his lecture, Webster said there is a need to immediately implement a mass transit system in Cebu to meet the demands of globalization.

Played out in other Asian cities, he cited a saturation of rapid transit where residents are only 500 to 800 meters away from a mass transit station.

This would encourage transit-oriented developments where employment, entertainment, shopping and everything else are integrated in a mixed-use location around a transit system.

Webster said planners need to get to know Cebu more to better craft better urbanization plans as well as add value to sectors which have experienced robust growth in recent years such as outsourcing, tourism and education.