Napolcom: only Duterte can return police control to Osmeña 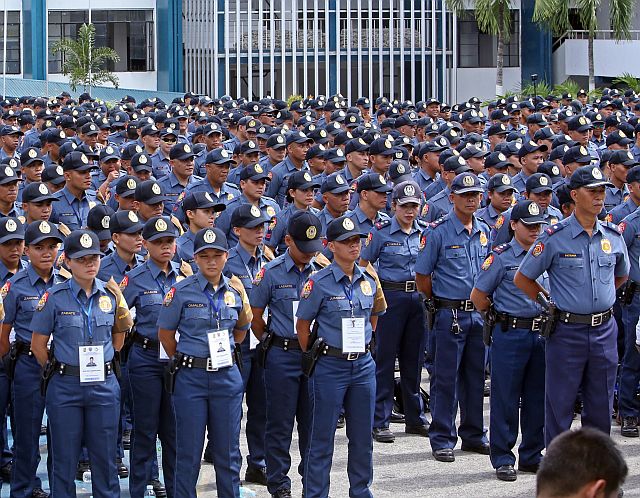 Cebu’s police men and women stand in attention in this photo taken on May 5, 2016, as they await for their deployemt to different areas in time for the May 9 elections. (CDN FILE PHOTO)

Lawyer Homer Mariano Cabaral, head of the Napolcom in Central Visayas, said they still would not reinstate the mayor’s deputization power over the Cebu City Police Office (CCPO).

“If he (Osmeña) wants to get it back, he better talk to President (Rodrigo) Duterte. Napolcom could not reinstate his deputization power. Only the President can,” Cabaral told Cebu Daily News over the phone yesterday.

Cabaral clarified that Napolcom did not take any shortcuts in taking back Osmeña’s supervision and control over the local police.

“We faithfully complied with the process and that’s the decision made, not by Napolcom-7 (Central Visayas), but by our en banc,” he said.

When Osmeña publicly announced that he would no longer support Cebu City policemen, Cabaral said they immediately conducted an investigation based on Napolcom Memorandum Circular 2001-003, which grants them the authority to launch a probe motu propio.

Results of the investigation were forwarded to the Napolcom en banc in Manila which decided to withdraw the deputization powers of Osmeña over the local police.

“Under the law, only Napolcom has administrative control over the police. However, we extended this power to the mayors whom we tapped as our deputized agents,” Cabaral explained.

Osmeña’s decision to stop supporting the local police was frowned upon by the Napolcom as it believed it placed the Cebu City policemen in jeopardy.

The mayor, expressing displeasure over the relief of key police officers in both Cebu City and the Police Regional Office in Central Visayas that he had considered his allies in the fight against illegal drugs, reacted by refusing to acknowledge the newly appointed city police director, Senior Supt. Joel Doria.

He also announced the suspension of the cash allowances for new CCPO personnel, including the P8,000 monthly allowance given to the city police chief.

Within days after Doria assumed office last month, Osmeña likewise washed his hands off the fight against illegal drugs and criminality and recalled the firearms issued by the city government to city policemen; stopped the gasoline allocation for police patrol cars; and halted the release of 15 new police cars that were already due to be delivered to CCPO.

Cabaral said Napolcom did not consult Del Mar and Rep. Rodrigo Abellanosa of the south district to avoid “politicizing” the investigation. Both Del Mar and Abellanosa are members of the Bando Osmeña-Pundok Kauswagan (BO-PK), a local party headed by Osmeña.

In a privilege speech delivered before the House of Representatives on Monday, Del Mar questioned the legality of the Napolcom en ban resolution that took away Osmeña’s authority over the police and called on the House Committee on Local Government to investigate.

The lawmaker said Napolcom was “grossly misinformed that the mayor is guilty of engaging in acts inimical to national security or which negate the effectiveness of the peace and order campaign as alleged.”

Read Next
Under fire, acting warden quits post, to be reassigned