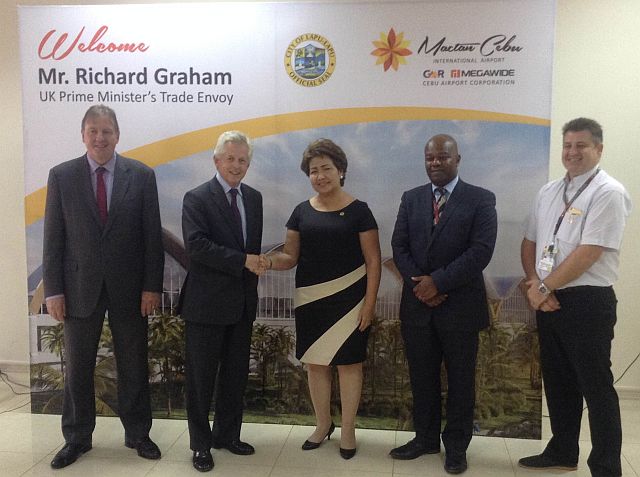 The United Kingdom (UK) has committed to develop the Mactan-Cebu International Airport (MCIA) Terminal 2 with the partnership of at least five British companies with GMR Megawide Cebu Airport Corp. for the project.

If this (Terminal 2 project) succeeds, this will encourage the president of this government to allow more PPP (Private Public Partnership) airports, which will entirely benefit the whole Philippines,” said UK Prime Minister’s Trade Envoy to the Philippines Richard Graham during a press briefing last Friday at the MCIA after his arrival for his Cebu visit.

Graham also said that the UK Prime Minister had asked him to find win-win situations that would be good for British businesses and good for the countries that they were working with.

GMR Megawide chief executive advisor Andrew Acquaah Harrison said that the airport management and the UK had forged a synergy to develop the airport that it might contribute further in boosting the regional and national economy as well as tourism.

Harrison was referring to the GMR Megawide’s partnership with companies from UK to develop and improve the airport’s Terminal 2.

“Our British partners will help MCIA optimize its efficiency and provide solutions in terms of technology and travel infrastructure. We have chosen UK because they know how to adapt to foreign environment,” Harrison said.

He also cited the five British firms that pledged to help in improving Terminal 2.

These are namely: ARUP (an engineering and design services provider that is active in 60 airports across the globe), WHSmith (one of UK’s leading retail group which will open its first store in the Philippines in Cebu), G4S Security (a global leader in providing integrated security services), Mott MacDonald (an engineering and development consultancy), and Smiths Detection (designer and manufacturer of sensors that detect explosives and chemicals).

Harrison also said two other British firms had yet to sign the contract of agreement.

Graham, for his part, encouraged the government to develop airports in the country because it would attract more tourists.
Aside from the airport project, the British envoy also said that British companies were also investing in the power and high-technology industries in the country.