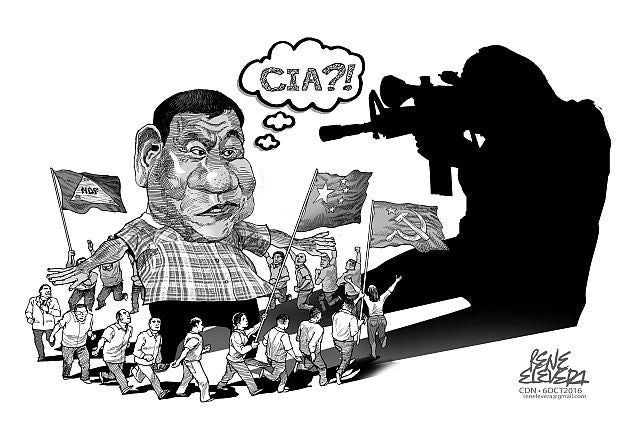 Cebu’s business leaders may not show it, but amid their public stance that it’s “business as usual” during the Age of Duterte, they have reason to worry about the President’s continuing antagonism towards everyone who dares criticize his extremist war on illegal drugs and lately, his pronouncements about plots to unseat or assassinate him while in office.

The recent decision by the Belgian contingent to cancel their visit to the country amid President Duterte’s lambasting of the European Union’s criticism of his war on drugs came amid plans by the Philippine delegation to visit the US and convince the business community there to continue to invest or augment their existing investments in the country.

Despite the President’s make-up visit to the Jewish community in the Philippines and subsequent apology, it is clear as day that President Rodrigo Duterte’s “foot-in-mouth” disease will remain incurable so long as he is in office.

Aside from his continued ranting, pontificating and sermonizing on the illegal drug problem, the President and his people rang anew the bells of coup plots supposedly aimed against him not just by some Filipinos living abroad but also by domestic groups who were supposedly affected by his administration’s war on drugs.

In fact, the President claimed that the Central Intelligence Agency (CIA) had planned to assassinate him for his anti-American stance; but while there is no ruling out that possibility, his coup claims are about as empty, hollow and unsubstantiated as the drug watch list that he announces in public.

Cabinet Secretary Leoncio Evasco Jr. continued to parrot the President’s coup plot claim even as he held an organizational meeting here in Cebu for a group that would lobby and advocate for participatory governance.

We only hope that Evasco’s participatory governance project stays true to what it claims to be and doesn’t turn out as yet another Duterte army of apologists and social media lynch mob that would threaten, discredit and bully those who dare criticize the Duterte administration.

Evasco’s claim that it is unpopular to advocate for human rights when the country’s five pillars of the justice system have collapsed only serves to continue to feed and justify the bloodlust of the perpetrators and a growing number within the public for extrajudicial killings in the country which claimed half, if not more than half, of the ongoing death toll of drug suspects and users.

The extrajudicial killings, President Duterte’s volatile temper and inherent proclivity for cursing and making enemies even in areas and with states and countries where there is none while kowtowing to the interests of China and Russia whose ideologies closely mirror his own; and the growing cadre of communists that he has now surrounded himself with have contributed in one way or another to the growing uncertainty in the country.