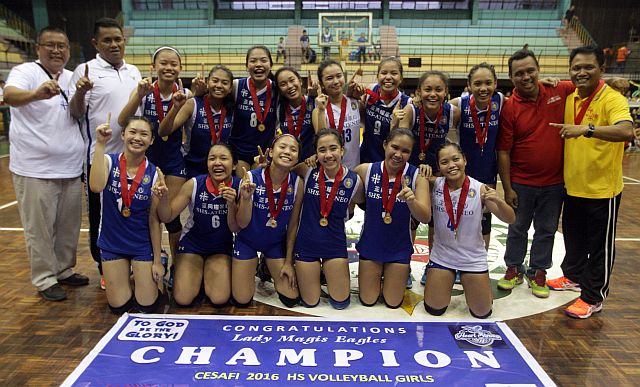 Kaye Santos (fourth from left, front row) celebrates with her teammates and team officials of the Sacred Heart School -Ateneo de Cebu after their championship victory over the University of San Jose-Recoletos in the Cesafi girls’ volleyball tournament (CDN PHOTO/TONEE DESPOJO).

AT 5-FOOT-2, Sacred Heart School – Ateneo de Cebu’s (SHS-AdC) Kaye Santos is one of the shortest players in the league, but last Sunday, she stood taller as the agile setter played through an injury and towed the Magis Eagles to their first title in the Cesafi high school volleyball tournament.

Unknown to many, the 16-year-old Santos played through multiple injuries in their finals series against the University of San Jose-Recoletos (USJ-R), suffering pains on her knees and wrist throughout the course of the season. Yet she managed to pull through and even won the Best Setter plum and the prestigious Most Valuable Player (MVP) award.

“We tried to manage our practices so that her injury wouldn’t worsen,” said Magis Eagles head coach Mario Sala. “But she successfully played and fought from the elimination round until the very last point of the championship.”

But rather than taking it as an excuse not to play well, Santos took it as a motivation as she displayed her play-making ability by setting up excellent sets to the team’s offensive weapons in Danielle Malazarte, Angelyna Canieso and most notably to Jennifer delos Santos, who sealed the championship with a powerful spike in the fourth.

“Ate Kaye (Santos) always plays as a fighter, and yesterday (Sunday), she definitely did. She had several minor injuries, but she did very well despite those. For me, she really deserved the best setter and MVP awards because even with the injuries she got, she still fought with us to the finish line,” said Canieso.

The gutsy plays of Santos also drew some attention from league’s legendary personalities, calling the upstart as one of the most hardworking high school players this year.

Santos admitted she almost gave up because of the unbearable pain of her injuries, but she just told herself to be strong in order to fulfill her promise to the Magis Eagles fans.

“Yes, USJ-R offered me free scholarship and miscellaneous, but I refused it because I wanted to stay in Ateneo.”