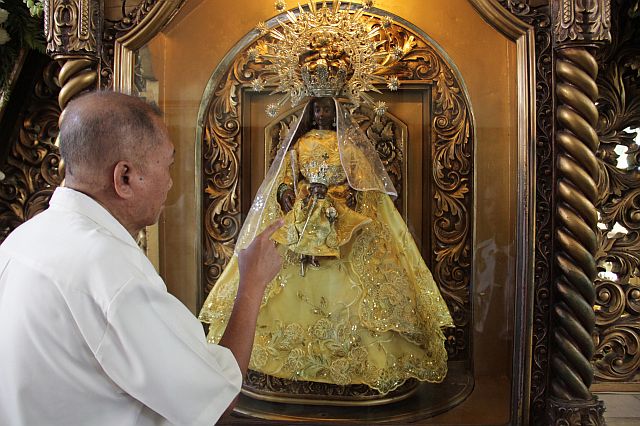 The image of Virgin of the Rule in Lapu-Lapu City.

THOUSANDS of devotees flocked to the Birhen dela Regla Parish in Lapu-Lapu City to pay respects to and venerate the city’s patron saint.

Devotees from all over Cebu and nearby provinces like Bohol and Negros Oriental made their yearly devotion to the Our Lady of Rule on her feast day yesterday.

Fr. Bogie Cabrera, the parish priest, said the fiesta celebration went smoothly from the start of the nine-day novena last November 12, that kicked off with a fluvial parade, until the feast day yesterday. He credited the good weather and security personnel for the success of the celebration.

“Okay kaayo ang weather, we’re afraid nga basin mouwan labi na sa procession pero wala ra gyud problema (The weather was fine, we were afraid it would rain especially that there was a procession but all went well),” said Cabrera.

Cabrera said a lot of devotees endured long lines to kiss and touch the image of the Virgin Mary. Almost all of them believed that they would be blessed with good health and luck for their sacrifices, prayers and endurance.

“Tremendous faith of the people,” Cabrera said, as most of the visitors travelled from as far as Bohol and Negros Oriental just to pay respects to and venerate Lapu-Lapu City’s patron saint.

People also felt safe as police and other security personnel were deployed to monitor and control individual and crowd behavior.

Meanwhile, police personnel responded to some trouble alarms involving drunk people and those who were not able to go home and slept on the roadside because of drunkenness.
But so far no major crime incidents were reported during the feast day, said Lapu-Lapu City Police Director Senior Supt. Rommel Cabagnot.

“The whole festivities were generally peaceful,” he said.
Mayor Paz Radaza said devotees had increased each year based on her observation during Mass.

She wished for more economic progress for the city and a peaceful environment for visitors and the Oponganons.