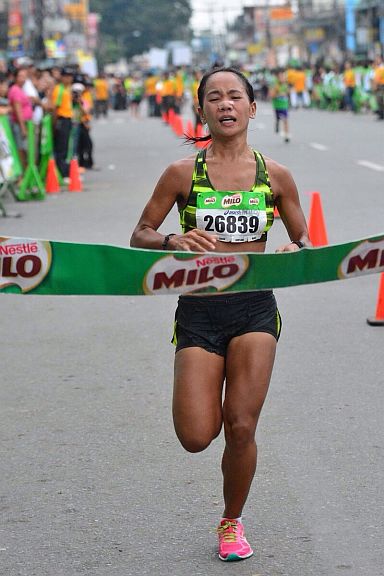 She may be facing serious problems in her bid to be included in the National Team for the 2017 Southeast Asian Games (SEAG). But that did not stop Cebuana Olympian Mary Joy Tabal from staying positive and inspiring her whole barangay by holding a free fun run last January 7 in Barangay Guba, Cebu City.

Earlier reports has stated that Tabal is not on the list of athletes that the Philippine Amateur Track and Field Association (Patafa) has submitted to the Philippine Sports Commission (PSC) for the biennial SEAG in Kuala Lumpur, Malaysia.

This is a major setback for Tabal who won silver in women’s marathon last 2015 when the games were hosted by Singapore.

Late last year, the PATAFA announced that Tabal is no longer part of its ranks right after she competed in the Rio Olympics.

However, instead of sulking in desolation, Tabal continued with her outreach programs in Barangay Guba by holding a three-kilometer fun run for the residents there.

“It was initially a grassroots fun run for the kids but we want to introduce running to the entire community and we want them to be involved so we opened it up to the entire barangay. Some of the parents of the kids of our grassroots programs, the elderly and a lot of Guba residents joined our fun run,” said Tabal.

Around 150 participants took part in the run.

Tabal and her trainer John Philip Dueñas are hoping to hold regular races not just in Guba but in other far-flung Cebu City barangays.

“With the help of Milo, we were able to give free singlets to those who joined the run. We did a similar activity last December 2015 exclusively for the kids of our grassroots program but now we decided to make it bigger,” said Tabal, who won her fourth straight National Milo Marathon title last month in Ilo-ilo.

Last year, Tabal staged her first ever fun run dubbed as “Chairs of Joy” for the benefit of Guba Elementary School.

Meanwhile, the 27-year old Olympian’s first major race of 2017 will be on February 19 when she defends her 21-kilometer half marathon title in the seventh SM2SM Run.

Some 100 members of Tabal’s grassroots program for running will also be racing in the 3k category.
Tabal and Duenas in partnership with SM City Cebu will also hold a free running clinic for those who will register for the SM2SM Run 7 which will kick off on January 21 at the Cebu City Sports Center (CCSC).

Read Next
Cebuano Arong to suit up for Cignal San Beda