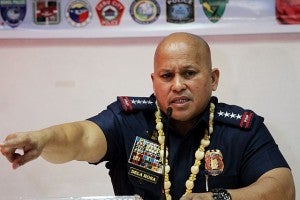 PHILIPPINE National Police (PNP) director Ronald “Bato” dela Rosa canceled his trip to Tagbilaran City, Bohol, at the last minute to be one of the judges of the Mutya ng Tagbilaran beauty pageant scheduled tonight.

Dela Rosa sent word through Sr. Supt. Felipe Natividad, chief of the Bohol Provincial Police Office, that he will no longer attend the pageant on the instructions of President Rodrigo Duterte.

Around 10 Asean leaders are expected to join summit meetings that will be held at the Philippine International Convention Center in Pasay City from April 26 to 29.

About 4, 000 police and military personnel will secure the foreign guests and meeting venues.

But despite Dela Rosa’s absence, Borja said, the PNP will still deploy around 300 policemen from the Tagbilaran City Police Office and from those coming from neighboring towns to secure the event.

Fifteen ladies representing the city’s 15 barangays are vying for the crown as Mutya ng Tagbilaran 2017.

The pageant will be held at 8 p.m. tonight at the Bohol Wisdon School Gymnasium.

Dela Rosa was supposed to be one of the 14 pageant judges that include Chief Presidential Counsel Salvador Panelo, sportscaster Diane Castillejo,

The pageant will be hosted by actress-singer Karylle Padilla-Yuzon and television host Tim Yap.

The Mutya ng Tagbilaran is one of the highlights of this year’s fiesta in honor of St. Joseph, the city’s patron saint, on May 1.

Read Next
‘WORK IN PROGRESS’