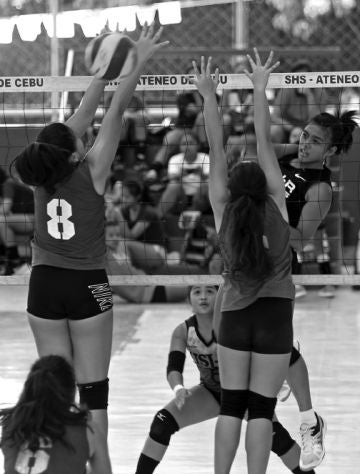 It was the championship performance the Baby Jaguars would’ve wanted to flaunt during last year’s Cesafi girls finals.

On Saturday, the Baby Jaguars finally solved the puzzle that is the Magis Eagles in a match that showcased a number of heroes, no one bigger than eventual Most Valuable Player Anne Krizzia Caasi who scored the game-winning spike which gave the Baby Jaguars an emphatic, 25-12, 25-23, 25-21 victory at the Lux Oriens Gym of SHS-AdC.

It was USJ-R’s second Shakey’s Girls’ Volleyball League-Central Visayas (SGVL-CV) title after winning in 2015. They skipped last year’s edition after the tournament was not included in the school’s budget.

This time however, the crown was clearly theirs after taking the opening set by a 13-point margin, 25-12 before weathering a spirited rally by the Magis Eagles in the second and third sets which the latter lost by just a combined six points.

“I just told my teammates after the second set not to rush the game because we all have the time in the world,” shared the 15-year old Anne Krizzia.

And the Baby Jaguars responded by controlling the tempo in the third, taking a 20-18 lead before dropping a quick 5-3 run highlighted by Anne Krizzia’s title-clinching spike that broke the hearts of the Magis Eagles and their faithful supporters.

“We learned from our defeat. I just told them to keep their focus and use our experience because we played in the Batang Pinoy and most of the players here are the ones who played in my Batang Pinoy, CVIRAA and Palaro lineup,” said USJ-R mentor Roldan Potot.

The triumphant Baby Jaguars will be representing Central Visayas in the SGVL League of Champions to be held in Manila later this year.
Earlier in the day, USPF clinched third place honors after defeating Southwestern University, 25-14, 22-25, 25-22.

Read Next
Run to eradicate hunger on July 30