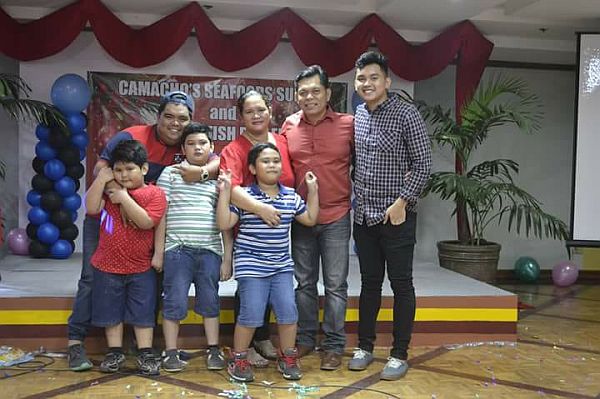 Frederico Camacho (6th from left), who owns Camacho Seafood Supply, has turned over the reins of his business to his sons Fred-Niel (2nd from left) and Rafael (right).
contributed photo

Born and raised on a small islet in the town of Getafe in the northern part of Bohol province, Frederico “Fredick” Camacho Jr. spent most of his life near the sea.

Growing up, Fredick learned to appreciate the ocean’s bounty as his fisherman father brought home their haul day in and day out.

And although small-scale fishing had its challenges, life was still good for Fredick and his seven other siblings.

“Thank God, we were never in a difficult position. Our parents were able to pull us through school with just fishing,” the 46-year-old businessman told Cebu Daily News in Cebuano.

His affinity to the sea and desire to provide for his family were what drove him to venture into the seafood business, establishing Camacho’s Seafood Supply in 1999.

“As a father, there is nothing you would want more than to be able to provide for your family. There is really money in seafood,” he said.
Fredick and his wife Ronila now live in Barangay Labangon, Cebu City, with their five sons.

Today, his business supplies the seafood needs of around 30 restaurants in Cebu City, Lapu-Lapu City and Bogo City.

But the journey to where he is now was never a walk in the park or, in Fredick’s case, a leisurely swim in the pond.

As the fourth child and eldest son, Fredick felt he needed to make sure that he could give a good life to his family just like his father did.

Fredick stayed in Barangay Pasil in Cebu City while studying to become a teacher at the University of the Visayas from 1988 to 1992.

It was during his college days that he met his wife, whose family owns a retail spot at the Pasil fish market, which is considered to be one of the biggest seafood trading centers in the Visayas.

Life seemed to have had other plans for the Bohol native as he was never able to pursue his dream of becoming a teacher and instead got married after getting his education degree in 1992.

Fredick decided to bring Ronila, who was pregnant with their first child during that time, back to Bohol so they could start a life there.

The would-be dad thought he could provide the good life for his family by being a fisherman like his father, but he later realized that his income was not enough to support his brood.

“What I got from fishing was insufficient. I would only earn P100 to P150 a day and sometimes nothing at all. It was so unfortunate,” Fredick said, adding that this prompted them to go back to Cebu City in 1994.

During that time, the Pasil fish market was teeming with fresh catch because of the use of the now-illegal “zipper” or the Danish seine method.

Fredick asked his mother-in-law Remedios to take him under her wing so that he can observe and learn how things were run in the marketplace.

For four years, he would help out with his mother-in-law’s business — waking up at midnight to make sure they get the freshest catch, unloading buckets of fish from trucks, and doing other demands asked of him — with an allowance of only P150 to P200 a day.

After four years, he already had enough knowledge to identify the different kinds of fish and whether these are fresh or not.

He then started to negotiate with the fishermen himself.

“I started with buying fish which my mother-in-law could no longer accommodate. In a day, I would be able to buy 10 truckloads of fish, which gave me a profit of P10,000,” Fredick said.

Then, in 1999, Camacho’s Seafood Supply got its first client through Casa Ilongga in SM City Cebu.

Camacho’s Seafood Supply was officially registered in 2008 with its clientele expanding to canteens, hospitals, and even schools.

With Casa Ilongga, the seafood company used to supply only 10 to 20 kilograms of fish. At present, it supplies up to 500 kilograms of seafood to 20 to 30 restaurants every day.

Earlier this year, Fredick said a family friend had given them a spot at the Pasil fish market, which would have cost them P1 million to purchase.

He is also taking a back seat from running the business and letting his two sons take the reins of the venture with his eldest Fred-Niel, 24, managing it and his younger brother, Rafael, 21, doing the administrative work.

Read Next
PNP sets up checkpoints