A decade ago, Manny Osmeña took me to his secret dining spots because he knew I loved food.

There was that Japanese restaurant in Punta Engaño named Kuhkai, just across an empty lot where he would later build the Mövenpick Resort.

There was also an Italian restaurant in what was then known as The Village in IT Park, where we had excellent carpaccio and good crusty bread.

He would always accompany each dish with a story, whether it was in its preparation or how difficult it was to source this ingredient,
or a more personal anecdote attached to it, for what is good food but a punctuation markin a man’s memory, eh?

And this man clearly had great history with his meals.

He wasn’t around when I dropped by the Ibiza Club in BGC two weeks ago, but everything about it was classic Manny O: He had somehow transported the spirit of the beachside club in Mactan to the middle of a concrete jungle.

The wide expanse of space, the white, the giant stage, the loungey furniture, the water feature that snaked around the perimeter. It was a respite, a quick escape.

“The show starts after your dinner,” we were told, and immediately ensconced in a private dining area.

I had been in this same room months earlier for a Cebu Pacific event, and it felt different without the crowd.

I could now make out the beautiful view of the business hub and its halogen glow in the quiet through the glass that surrounded us. 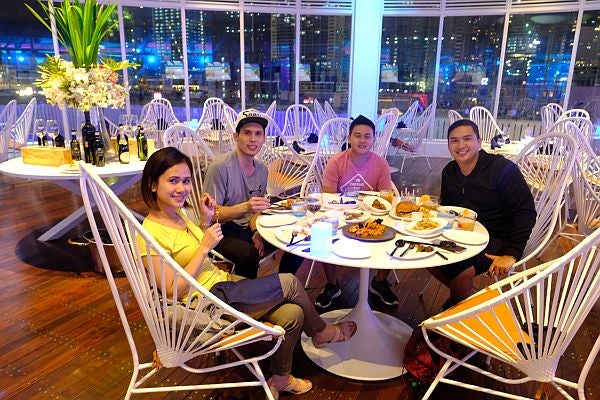 NIGHT OUT with Micah and Dondon Hontiveros, and Iliganons Harold Estrellanes and Keno Bartolome

We lingered a bit at the jamon serrano bruschetta, myself taking on Manny O’s role as I informed my companions that the thinly-sliced cured pork is
a Spanish classic and stored in sheds called secaderos at high altitudes, giving them the moniker mountain ham.

The rice dish arrived, aptly named the Paella Eivissa, christened for the Catalan version of Ibiza.

For those craving heft (I was in the company of two growing boys, after all), we were also served the 250g US Angus Super Burger, a perennial crowd pleaser. 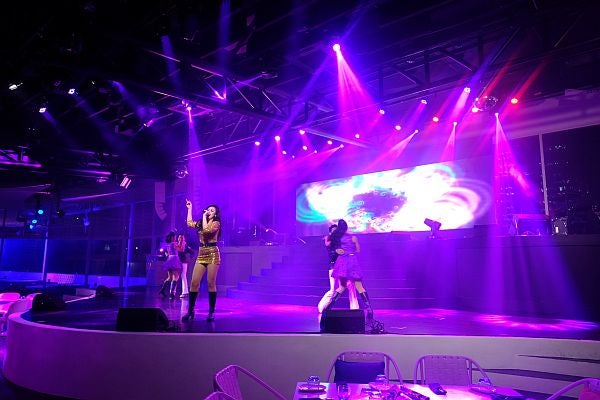 NIGHTLY SHOWS on centerstage, tonight it was Retro Disco!

But Micah Dizon-Hontiveros, wife of Cebuano hotshot Dondon Hontiveros, and skilled in the kitchen because she is from Pampanga (one of the rare times we play happily into these stereotypes), agrees on my favorite on the menu: the signature spaghetti carbonara, an Ibiza Beach Club original.

Unsurprisingly, it is the simplest dish that catches my attention.

Traditionally made from raw eggs, cheese and pancetta (Italian ham), this version is distinctly Filipino with the addition of cream, inventively served up in an eggshell, cracked on top and filled with rich sauce.

Pouring it on top of the spaghetti becomes quite the experience, involving the diner in the preparation of the dish.

It is also, I surmise, a sophisticated take on  “on the side”, for the diner who prefers his carbonara pristinely Italian, hold the cream…and just my raw egg please. I could almost hear Manny O’s voice  explaining the mindful consideration to me.

Postcards from the edge: Why living on the fringes of Tokyo made my budget trip possible