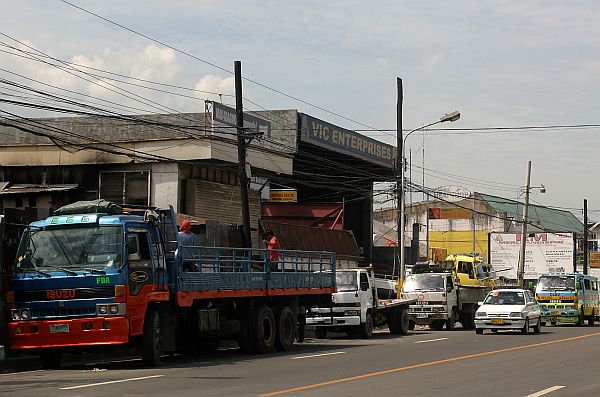 The trucks owned by hardware supply store Vic Enterprises had been a frequent source of complaints for causing traffic and spreading dust to the riding public.
(CDN PHOTO/ JUNJIE MENDOZA)

It’s not only in Cebu City where the construction supply and hardware store Vic Enterprises had drawn complaints from commuters and motorists alike.

Manatad, also incumbent president of the Association of Barangay Captains (ABC) in Mandaue City, referred the complaints to the Traffic Enforcement Agency of Mandaue (TEAM).

Manatad said the store has more warehouses along Lopez Jaena Highway in Barangay Subangdaku and Barangay Tipolo and in the North Reclamation Area (NRA).

Vic Enterprises had been threatened with closure by the Cebu City government after commuters and motorists complained that the store’s trucks have caused heavy traffic, damaged roads and dust at the MJ Cuenco Avenue, Mabolo area.

TEAM chief Glen Antigua said they already apprehended the drivers of these trucks after learning that they were making U-turns in the area even without any U-turn slots for trucks.

He said these truck drivers usually take U-turns during peak hours in the afternoon.

Manatad said they plan to place plastic barriers along Lopez Jaena Highway to act as lane splitters and prevent these trucks from executing U-turns.

He said they placed metal railings and concrete barriers before in the area but it caused accidents.