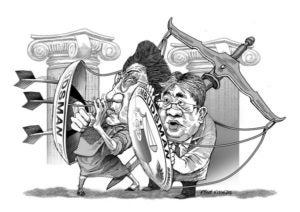 Ferdinand Marcos was buried in the Libingan ng mga Bayani after the majority of Supreme Court (SC) justices back in 2016 found nothing objectionable or vile with granting the ousted dictator an honor normally conferred on heroes.

In consonance with the High Court’s verdict, guards were posted at the Marcos burial ground to discourage any attempt to disinter the despot’s remains.

But for all the Marcos family and loyalists’ discomfiture, the cadaver is likely to remain where it is, a permanent question mark if not stain on the sacredness of our heroes’ cemetery because the court’s pronouncement, no matter how debatable, bound the body there with the force of law.

Nowadays, anyone who forgets to append the word “city” to locales like Bogo, Carcar and Naga in Cebu courts correction since 2011 jurisprudence settled the name and status of these local government units.

No one may (unfortunately so to many), legally dig up and remove Marcos’ bones and remove them from our heroes’ resting place, and say that he has the right to do so since the High Court might justify his stunt.

No one may sue a cop for conduct regularized by a court-recognized martial law in places in Mindanao in the hope that the SC might change its mind on the constitutionality of Duterte’s martial law.

Government agencies in charge of public coffers may not withhold the internal revenue allotments of Bogo, Carcar and Naga cities in anticipation of a ruling by the supreme tribunal that would turn the cities back into municipalities.

No one, therefore, may be faulted for finding a tall tale in the opinion of the President’s lead lawyer, Salvador Panelo, that his principal’s suspension of Deputy Ombudsman Melchor Arthur Carandang enjoys the presumption of regularity.

Jurisprudence states it is irregular.

“We declared Section 8(2) of RA No. 6770 unconstitutional by granting disciplinary jurisdiction to the President over a Deputy Ombudsman, in violation of the independence of the Office of the Ombudsman,” the 2014 decision read, in reference to the Ombudsman Act.

Panelo is using Malacañang’s bully pulpit in a speculative, futile effort to legitimize an act that the SC already declared unlawful. There is a term for that: culpable violation of the Constitution.

“In a society founded on the rule of law,” Ombudsman Conchita Carpio–Morales showed, “the arbitrary disregard of a clearly worded jurisprudence coupled with a confident stance that it will be changed should never be countenanced.”

Citizens, led by magistrates, lawyers and law students whose reasoning has not been addled by the might of the law should be at the forefront of protesting the Palace’s wishful braggadocio.

Read Next
Standing her ground