‘WAKE UP, FIGHT CULTURE OF IMPUNITY’ 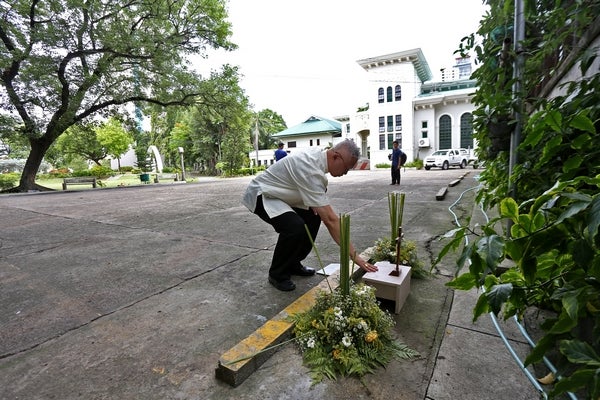 PRELATE’S PRAYER. Cebu Archbishop Jose Palma, upon arriving from Manila on Thursday, July 12, 2018, says a prayer as he touches a mini altar at the site inside the Archbishop’s Residence along D. Jakosalem St., Cebu City, where Jefrey Cañedo was killed by policemen.

Cebu Archbishop Jose Palma has appealed for an end in the spate of murders, as bodies piled up on the streets of Cebu City and province almost every day.

Concerned about the number of deaths, the 68-year-old prelate called on the people to wake up and fight the culture of violence that has enveloped Cebu and other parts of the country.

“We’re not happy with these deaths. We feel sad.

It has reached a level wherein respect for human life is lost, while the culture of impunity reigns,” he said in an interview on Friday.

“Whoever is doing it, either connected to the illegal drugs trade or for whatever reason, they should know that no one (except God) has the right to take someone else’s life.

We know that this is not the Christian way,” he added.

Palma, the chief shepherd of the largest archdiocese in the country with close to four million lay Catholics and about 600 priests — both diocesan and religious, said the Church feels for families of the victims who suffer the loss of their beloved.

“We have a lot of questions with few answers about these killings which we could not justify nor understand,” he said.

On July 16, Monday, the feast of the Our Lady of Mt. Carmel, Catholic Church leaders urged the entire nation to spend the day in prayer and penance to invoke God’s mercy and justice on “those who have blasphemed God’s Holy Name, those who slander and bear false witness, and those who commit murder or justify murder as a means for fighting criminality in our country.”

The next three days, from July 17 to 19, will be spent for “fasting, praying, and alms giving.”

“Our battle is not so much against human beings. It is a struggle against evil. We believe in the power of prayer and fasting,” Palma said.

Based on records of law enforcement units, at least 195 persons in the Central Visayas region — most of whom were from Cebu — were killed in alleged shootouts with policemen, the Philippine Drug Enforcement Agency in Central Visayas (PDEA-7), and the National Bureau of Investigation since President Rodrigo Duterte launched the war on drugs in July 2016.

At least 215 others were gunned down by still unknown assailants in Central Visayas — all in a span of two years.

One of the casualties was a disgruntled husband who wanted to talk to Palma at the Archbishop’s Residence compound in Cebu City but was eventually killed by operatives of the Cebu City Police Office’s Mobile Patrol Group when he allegedly tried to engage them in a shootout.

Lawyer Jose Glenn Capanas, president of the Integrated Bar of the Philippines’ (IBP) Cebu City Chapter, said the killings have instilled fear not just among ordinary citizens but also among local chief executives who voiced out concern about their safety.

“It is in this light that we call on all the law enforcement authorities concerned to be more visible as deterrent to the continued perpetration of crimes, and that they must pursue the perpetrators and ensure that at all times the rule of law prevails,” he told Cebu Daily News.

In a separate statement, lawyer Mundlyn Misal-Martin, president of the IBP Cebu Province Chapter, said that even lawyers are concerned about their safety following the deaths of two members of the bar.

“These killings have stolen our liberties to live normally under the sun. While we walk with dignity as lawyers for the country, our worries had sipped our energies and would eventually kill our desires to practice the profession. The angels of death do not come normally for us. There are no angels but mercenaries of men,” she said.

Last February 19, lawyer Jonnah John Ungab, the counsel of self-confessed drug lord Rolando “Kerwin” Espinosa Jr., was gunned down by an unidentified assailant while driving his car outside the Cebu City Hall of Justice.

Early this month, criminal lawyer Salvador Solima was killed by gunmen who pretended to be his clients inside his house in Barangay Guadalupe, Cebu City.

His wife Verose was wounded during the incident.

At least three suspects in the killing of Solima were arrested and charged by the police.

Martin expressed hope that justice would be served to the families of the two lawyers as well as the other victims of the killings.

“Our cry for justice against the rampant killings will never cease. This new norm must be stopped for the sake of this country and for the future of this generation. We maintain that lawyers are solars of development and our contribution for this country, just like other ordinary individuals, are needed,” she said.

Lawyer Arvin Odron, director of the Commission on Human Rights in Central Visayas (CHR-7), said the rash of killings in Cebu and other parts of the country demonstrates the inclination to disrespect the most fundamental right to life.

“We all know that the entire human kind needs protection from the government for a meaningful human existence, yet despite such legal protection and measures adopted, lawless elements and criminals boldly and brazenly take lives in an unacceptable way,” he said.

Odron said the killings in Cebu have become alarming.

“I don’t think there is still a safe place in the entire country much more in Cebu to live with. Even people resting in a supposed haven, in the privacy of their houses, cannot even (be) assure(d) of their safety,” he said.

“Take the case of 4-year-old Skyler Abatayo who was studying inside his room but was hit by a stray bullet during a police operation, as well as the death of the man inside the Archbishop’s Palace. How much more in a public place where lives are brazenly taken even in broad daylight and in the presence of so many people?” he added.

To date, the commission has investigated at least 70 cases of alleged extrajudicial killings in the region.

Of the cases investigated by CHR-7, at least six, which involved either policemen or operatives of the PDEA-7, were elevated to the Office of the Ombudsman. The cases are still remain pending at the anti-graft office.

The low number of complainants purportedly indicates that the families of many EJK victims have lost hope of ever getting the perpetrators to answer for their crimes, dismayed by the lack of progress in the investigation of pending cases.

Odron called on the community to be vigilant and to help stop the killings.

“Without the concerted efforts of people from all walks of life, our law enforcement for sure cannot single-handedly take the cudgels of solving these criminalities by themselves. The support of the community is indispensable,” he said.

“We are working on a possible witness who may execute an affidavit against the suspects,” he said.

Sarzuelo was driving her Toyota Yaris car in Barangay Poblacion, Tabuelan town in northwest Cebu at dawn on Thursday when she was killed by at least four perpetrators on board two motorcycles.

The Cebu City Police Office is investigating three persons who might have a hand in the killing of former councilman Glen Mark Manal of Barangay Lorega San Miguel.

Manal was walking on his way home along New Imus Road past 11 p.m. on Wednesday when he was gunned down by motorcycle-riding men.

Chief Insp. Kenneth Paul Albotra, chief of the Parian Police Station, said their witnesses’ description matched some people in their rogue gallery, but he declined to identify them. /With BENJIE B. TALISIC AND NESTLE L. SEMILLA

Read Next
JOY’S WISH: A HUG FROM PA