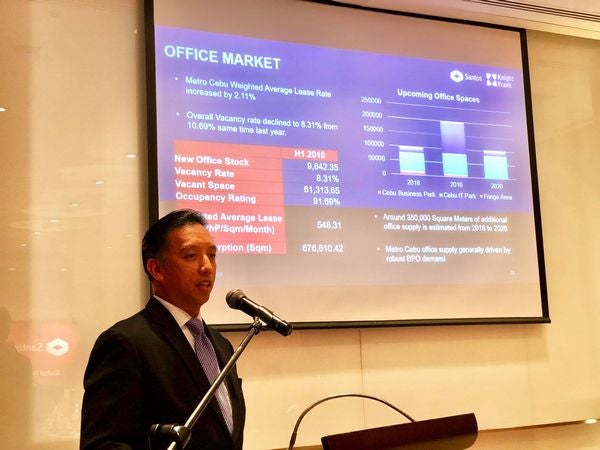 As if the number of skyscrapers dotting Metro Cebu’s skyline is not enough, real estate industry experts continue to see a surge in Cebu’s burgeoning property sector.

In a recent round table with reporters, representatives of the firm presented an outlook of Metro Cebu’s real estate market with its office stock projected to grow by 47 percent between 2018 and 2020.

“The growth of Cebu’s property sector this year solidifies the metropolis’ position as the leading investment destination in the Philippines outside Metro Manila. With a strong economy, large pool of talent and new infrastructure in place, Cebu is well on its way to becoming a global city,” said Rick Santos, chairman and CEO of Santos Knight Frank.

Specifically, they expect at least 350,000 square meters of gross leasable area to open within between the next three years.

During the first half or 2018, the firm reported that Cebu continued to see new investments enter its booming property sector. These were driven by a strong local economy, the presence of a skilled labor force, and affordable office lease rates.

The new P17.5 billion facility, which caters solely to international flights, is expected to increase MCIA’s capacity from 4.5 million to 12.5 million passengers annually.

“While a number of cross-border transactions have recently been closed in Cebu, in particular from China, South Korea and Japan, the improvements to the airport will further increase tourism, facilitate greater inflow of capital and help continue the metropolis’s growth momentum in the coming years,” he said.

“The IT-BPO (information technology-business process outsourcing) industry will continue to drive commercial demand and traditional office operations will have the opportunity to upgrade to new, modern buildings for their front office needs,” he added.

Even currently, Radovan said there are no problems with Cebu’s office market supply.

He said both the Cebu Business Park (CBP) and the Cebu IT Park (CITP) are delivering a “healthy pipe” of office space while fringe areas also have a lot of supply.

Among the recent transactions by Santos Knight Frank is the Philamlife Tower in the CBP wherein e-commerce giant Amazon.com Inc. has taken up a lot of office space for their first customer service center in the Philippines.

This decision by Amazon to set up shop in Cebu and not in Manila proves that the local economy of Cebu and its pool of talent continue to attract foreign investors, Radovan said.

He also cited printer maker Lexmark which has also called Cebu its home and has not expanded its operations outside Cebu.

“We see demand still continuing for IT-BPO firms. A lot of the Fortune 500 companies have offices here in Cebu. We are also looking at other new entrants in the Cebu market,” Radovan said.

But if there is anything Cebu can do to help ensure that these rosy prospects continue, both Santos and Radovan agree that more infrastructure development is needed.

Santos said the Philippines and Cebu have become “victims of its own success” as shown by urban problems like traffic congestion and flooding.

But still, Santos said they continue to be optimistic with Cebu especially with other major infrastructure projects in the pipeline including the Cebu-Cordova Link Expressway (CCLEX) project which is expected to be finished by 2021.

He also cited other projects like the new Cebu International Container Port, and other inter-island bridges connecting Cebu to Bohol, and Cebu to Negros among others.