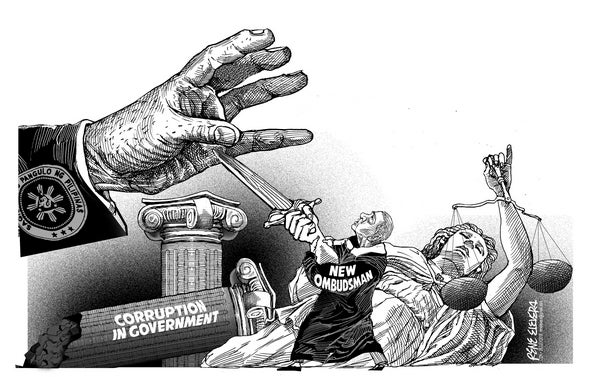 The good news is that President Rodrigo Duterte’s longtime counsel, Edna Batacan has not succeeded Conchita Carpio-Morales at the helm of the Office of the Ombudsman.

Batacan had sparked controversy when she confessed to being party to corruption when she had served as a lawyer under the Ombudsman.

At the same time, lawyer Ferdinand Topacio had alleged that Batacan solicited P8 million from a client to secure a dismissal of charges from an Ombudsman staffer.

The worrying news is that the person Duterte chose to succeed Morales does not at the outset enjoy public perception of independence from the Chief Executive.

Supreme Court Associate Justice Samuel Martires, the Ombudsman designate has had a remarkable career, having served in the anti-corruption court, the Sandiganbayan.
But he has dismissed cases against Duterte when he was still mayor of Davao City.

The litmus test of the tenure of an Ombudsman Martires will be whether or not he will revisit the charge of underdeclared assets leveled against the President and build a case against him.

Morales had proven her integrity by being blind to who her office indicted. Charges that she was hired to hound Gloria Macapagal-Arroyo cannot hold water because she had filed cases not only against the now House Speaker but also against the President she swore into office, Benigno Aquino III.

Ombudsman Martires will do well by clearing smaller obstacles as he journeys towards the big test.

His office has a standing order that he can echo for the dismissal from office of Duterte ally and former Deputy Speaker Gwendolyn Garcia.

State auditors have recommended the filing of cases for waste of public money against a number of officials under the President’s communications department.
The Ombudsman is the people’s advocate for ensuring good governance.

But in practice Ombudsman Martires has two choices: exceed expectations that he is a Duterte lackey, or project a fairness that in practice becomes window dressing for the President.

The ignominy that accompanied the exit of another ex-Ombudsman, Mercedita Gutierrez, sufficiently caution Martires to be a witness, a martyr to integrity.

Read Next
ANOTHER KILLING