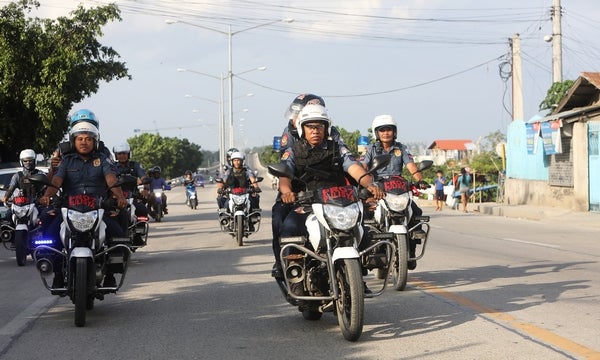 POLICE PATROL: The Tactical Motorcycle Reaction Unit of the Mandaue City Police Office are on their way to their assignments in areas that are prone to criminality, as part of the city’s police visibility campaign in this photo taken on Aug. 12, 2018.

Amid a growing concern over the unsolved killings in Metro Cebu with many of these crimes committed by gunmen riding-in-tandem on a motorcycle, the Mandaue City Police Office (MCPO) decided to deploy its own riding-in-tandem cops.

This time, the policemen are in uniform, armed with long firearms, and wearing bulletproof vests. Their task is to patrol the city’s streets round the clock.

Despite public unease, particularly in Cebu City, over the suspected involvement of some policemen in some of these killings, the MCPO was confident that this method would not only be a crime deterrent but would bring back trust to the city’s police force.

Allegations that the police were providing protection to vigilantes operating in Cebu also surfaced as the spate of killings continues.

The police have vehemently denied the allegation.

In Cebu City, the Regional Police Office in Central Visayas (PRO-7) has also decided to augment the number of policemen assigned to the Cebu City Police Office (CCPO) to aid not only in anti-crime operations but also to monitor barangays identified to be “drug infested.”

“Some of the killings were premeditated. That is why we implemented clean rider stickers, checkpoints and now more personnel on the streets,” said Chief Supt. Debold Sinas, PRO-7 director on
Sunday.

This developed as Cebu City Mayor Tomas Osmeña remained convinced by the explanation of top police authorities in Cebu that SPO1 Roderick Balili, the policeman who died by supposedly accidentally shooting himself twice in the chest, was not the same gunman who was shot and wounded by Philippine Drug Enforcement Agency in Central Visayas (PDEA-7) senior agent Von Rian Tecson.

Tecson, who was waylaid in Carcar City by a group of motorcycle-riding men on August 8, died in the incident but not before he was able to fire back at one of his attackers.

Osmeña yesterday dared the police to show evidence to prove their claim that Balili died of accidental firing.

“Ask the police to show you the car where Balili shot himself three times. Ask them why they did not send an ambulance,” he said.

The killing of Tecson has added to the growing list of unsolved assassinations in Metro Cebu, many of which were done in broad daylight and in public places.

A well known rights advocate, Fr. Robert Reyes, popularly known as the ‘running priest’ for bringing attention to social issues by engaging in long distance running projects, also expressed concern that more persons would be added to the list of deaths by gun attacks unless the government and the Philippine National Police (PNP) scale down their war on drugs.

But Villaro said that when the MCPO launched the Tactical Motorcycle Reaction Unit (TRMU) last Friday, no killing has been reported in the city since Thursday.

Judith Cerdeña, 42, said she felt safe whenever she saw policemen patrolling their area in Barangay Paknaan.

“Bisan doubtful karon ang uban tawo sa police, ako safe akong mabati kun naa na sila sa mga kadalanan (Even if other people have started to doubt the police, I feel safe whenever I saw them on the streets),”said Cerdena.

The TRMU was set up last year as a unit in each police precinct under the MCPO but these have not been fully functional until it was reactivated last Aug. 10 as a 20-man team directly under the MCPO director.

Villaro said TRMU is a unit that focuses in patrolling the city streets since they already have other units like the City Mobile Force Company, which conducts random checkpoints.

“Through this (TRMU) we are now able to intensify all our police operations for crime prevention and crime solution,” said Villaro partly in Cebuano.

SPO1 Marlon Estoce, one of the TRMU’s supervisors, said that the unit also serves as the first responders to calls for police assistance, especially in areas that are not accessible to mobile cars.

Estoce said they were also paying particular attention to areas in the city that have a high number of reported shooting incidents.

In Cebu City, Sinas said, Barangay Ermita is one of their top priority areas to receive an augmentation force, it being tagged as one of the city’s drug hotspots.

Personnel from PRO-7’s Regional Mobile Force Battalion (RMFB) will be the one assisting the local stations, said Sinas.

Osmeña yesterday expressed his distrust of the police in Central Visayas.

“I don’t trust PRO-7. They are obviously the suspects [in the killings],” Osmeña said in a message sent to Cebu Daily News on Sunday.

Osmeña was among the first to the point to alleged police complacency in the killings after the death of PO3 Eugene Calumba, who was shot dead by the bodyguard of Tejero Barangay Councilman Jessielou Cadungog in an alleged botched ambush on July 30.

The PRO-7 belied the claim and countered that Calumba was only conducting a surveillance operation along T. Padilla Extension when he was shot unprovoked.

In an unexpected twist of events, Cadungog, who was supposedly the target of an ambush, is now facing a police-initiated murder complaint along with his bodyguard for the death of Calumba.

The mayor’s suspicion about the policemen acting as alleged “hitmen” grew after he received reports that a policeman was involved in the ambush-slay of Tecson.

PRO-7 denied that SPO1 Roderick Balili, who was named by the mayor as among the attackers of Tecson, was involved in the ambush.

Balili, Sinas said, was wounded in an “accidental firing” and that some people might have mistaken him to be involved in the Tecson ambush since both incidents happened on the same day.

Balili, according to PRO-7, accidentally shoot himself twice in the chest while inside a car with two other policemen while they were on an anti-drug surveillance operation in another part of southern Cebu , in Pinamungajan town, which was some 30 kilometers away from Carcar City.

Sinas, in a media briefing on Friday morning, said that Balili was already in a stable condition. But on Saturday, PRO-7 confirmed that the policeman had died at around 8 p.m. of Friday.

Tecson’s driver, Arnulfo Bauyaban, was also hit in the leg but managed to run away during the ambush, earlier said that Tecson was able to fire back and hit one of the gunmen who was rescued by his cohorts and taken by men on board a back-up vehicle, a red Mitsubishi Pajero.

Meanwhile, Reyes, who was in Cebu on Sunday, echoed the suspicion of Osmeña that police personnel who were newly assigned in Cebu were likely to be responsible for the recent killings.

“Of course! I’m sure of that … I’m involved in the fight against extra judicial killings and there are witnesses who saw policemen actually killing innocent people,” said Reyes.

He added: “Killing has become a propaganda that I will kill all of you if you do not shut up,” he added.