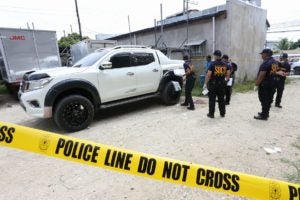 Scene of the Crime Operatives (SOCO) examine the vehicle believed to be owned by Johnson Sy Chiaoco who was shot by unidentified men riding-in-tandem on a motorcycle in front of an establishment in H. Cortes Cabangcalan, Mandaue City this morning. | Junjie Mendoza

A businessman was rushed to a private hospital after he was shot by unidentified assailants riding on board a motorcycle in front of an establishment along Hernan Cortes Street, Barangay Cabancalan, Mandaue City at past 8 a.m. on Wednesday (September 12)

Initial investigation showed that the victim was about to disembark from his vehicle when the suspects wearing bonnets fired shots at him.

Chiaoco sustained a gushot wound on the right side of his head.

Police have yet to identify the motive of the crime and the identity of the suspects.

Read Next
Woman arrested inside motel in buy-bust operation