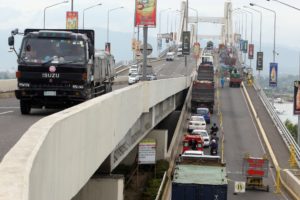 Traffic flow is expected to drastically slow down; CTMS to provide U-turn slots for traffic rerouting

The public works department will close a part of the Marcelo Fernan Bridge starting Thursday to allow the repair of its viaduct.

The temporary closure will last until Sunday, September 23.

The announcement was made during the Mactan-Cebu Bridge Management Board (MCBMB) meeting on Tuesday at the Capitol Social Hall.

A traffic rerouting scheme will be implemented in the area, said Mario Napule, head of City Traffic Management System (CTMS) of Lapu-Lapu City.

Napule said they will provide a U-turn slot near the foot of the Marcelo Fernan Bridge in Lapu-Lapu City for vehicles from Mandaue City to the airport.

To lessen and manage the congestion at ML Quezon Highway, he said vehicles coming from the airport going to the Lapu-Lapu City proper may use the alternate road below the bridge, while vehicles going to Mandaue City from the airport can take the usual route to the bridge.

(Motorists and commuters really have to be early because traffic flow in the area is expected to be slow while a part of the bridge is closed.)

He suggested that some may want to take the boat rides from Pier 3 in Cebu City to Muelle Osmeña in Barangay Poblacion and at the Island Central Mall wharf in Barangay Pusok of Lapu-Lapu City.

Glenn Antigua, chief of Operations of Traffic Agency of Mandaue (TEAM), said only the viaduct on the Lapu-Lapu side will be closed but the bridge will still be passable to vehicles to and from Lapu-Lapu City.

He said traffic flow, however, would be affected.

“Motorists going to Lapu-Lapu or those with flights should be as early as much as possible,” Antigua said.

Read Next
Duterte to visit Cebu on Friday