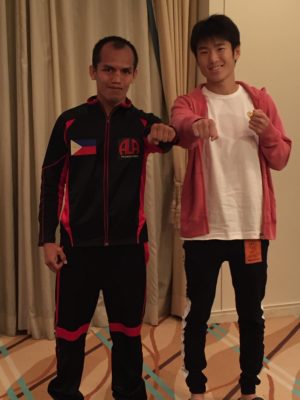 “I just have to relax, most especially my mind,” he said. “I always think about the good things to keep myself positive heading to the fight.”

Melindo will fight for a world title for the fifth time in his career. This time he faces a younger Shiro, a 26-year-old boxer who holds an unbeaten record of 13-0-0 (win-loss-draw).

“When it comes to mental toughness, that will be determined inside the ring. But now I have to relax so that everything will be easier once the bell rings,” added Melindo, who sports a record of 37-3-0 with 13 knockout victories.

“He was acclimatizing very easy here because the weather here right now is like in the Philippines. It is not cold yet so there’s no problem in getting the weight. He also has good medical results during the examination,” he said.

Melindo has fought three times in Japan and one of those fights was against Akira Yaegashi in May of 2017, where he won via a first-round technical knockout to win the IBF world title. In the same year, he lost the title to Japanese Ryoichi Taguchi via unanimous decision.

Read Next
Ganoza takes on Alera in Danao card