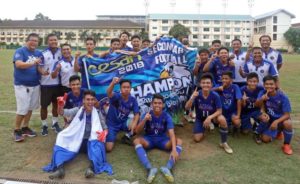 The Magis Eagles foiled what would have been a fairy tale ending for the University of San Jose Recoletos (USJ-R), 1-0, via a free direct kick taken by Maquiling right outside the box in the 79th minute following a tackling foul.

“I feel good because I was able to end my last Cesafi with a win, give my best and give honor to my school,” said the 18-year-old Maquiling, who also sealed the title for the Magis Eagles back in 2016 also with his lone goal in the second half.

At that time, they defeated the Don Bosco Technical College (DBTC) Greywolves, who this year settled for third place after prevailing in a penalty shootout, 5-2, against the University of San Carlos (USC), in a game held ahead of the championship match.

According to Maquiling, he was sad before the game started because he knew he couldn’t give it a hundred percent because he was injured.

“But I know that the coaches, my teammates and God will be there for us,” quipped Maquiling, who was nursing an injured right foot which was why he was only able to train for two days for the Cesafi finals match and had trouble running and kicking during the game.

Maquiling was named as the Most Valuable Player as well as the top scorer of the tournament with a total of nine goals.

Two other Ateneo players were also given special awards. Team captain Pomeroy John Veloso was honored as the Best Midfielder while John Francis Zambrano was named as the Best Goalkeeper.

The Best Defender award was given to USJ-R’s Januar James Villarin.

Ateneo head coach Oliver “Bingbing” Colina said that he is very happy with the team’s achievement especially that this is the first time that he handled a team for the Cesafi high school division.

“We worked on this for almost four months, since June from 5 a.m. to 7 a.m.,” said Colina adding, that as a reward for the team’s hardwork, they will have a training camp in Japan next year.

Colina said that in the first half, his team was not playing their game, they struggled at ball possession and were resorting to long balls, most probably due to nerves.

Colina added that their game plan was to contain four key players of USJ-R, the behind striker so he would not be able to feed the ball to the wingers, which Veloso was successfully able to do.

According to Colina, he fielded most of his senior players in Maquiling, Roygbiv Barro and Christopher Osawa in the first half for the build-up, which paid off in the second half.

Read Next
Katarina Rodriguez FLIES TO CHINA FOR MISS WORLD 2018