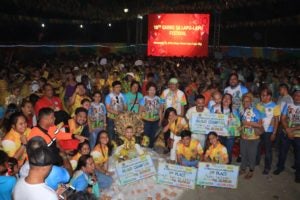 Gun-ob’s Teresa Benita Anino Roma receives the P30,000 check for winning the Search for The Festival Queen of the Garbo sa Lapu-Lapu Festival.

Aside from that the Barangay Gun-ob’s float also got the second place win in the float category and brought home the P60,000 cash prize.

The Gun-ob contingent bested the eight other contingents and won over the judges and the crowd with their performance where they used lechon and puso as a part of their love story act.

Lechon and puso and the Virgin of the Rule on Gun-ob’s entry for the float category bags the second prize in the category and the P60,000 cash prize.

“Nindot ila intro drama bahin sa ilang product Lechon and Puso. Story about lovers nga ang lalaki wala magustohi sa inahan sa babaye kay wala tarong trabaho pero after several years nahimong negosyante og lechon ug nahimong mayor. Naa sila hugot line nakilig ang audience. Lalaki says to his uyab: Mao ra lage kag lechon, the woman asked why? Lalaki says: Bagay ka sa akong puso. The guy then took a piece of puso (hanging rice and gave this to the woman),” said Eduardo Cuizon, Association of Barangay Councils Lapu-Lapu City president, on why Gun-ob won the major prizes.
(Their entrance was memorable as it has drama and a storyline that revolves around two lovers, lechon and puso. The story of a boyfriend who was not liked by the mother of her girlfriend, but who overcame all this by working hard and became a successful trader of lechon and who became a mayor. They had a hugot line in a scene which won over the crowd and the judges: The man told his woman that she was like lechon and when the woman asked why, the man told her that it was because she was suited for his heart (puso) and then the guy took a hanging rice and gave it to the woman).

Garbo sa Lapu-Lapu now has improved so much — the dancing contingents becoming grander, elegant, the set-up has bleachers and LED screens and more props and nice floats,” Radaza said.