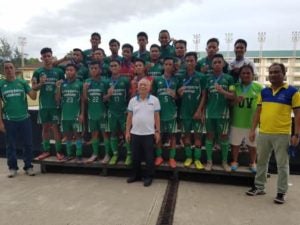 A loss is a loss. No matter how you lose a championship match, it will hurt all the same.

But for the University of the Visayas (UV), its loss to the defending champion University of San Carlos (USC) in the Cesafi men’s football finals seemed a bit more painful.

Because this year, the Green Booters believed that with the title, they would finally get the full attention of the UV administration.

The Green Booters actually wanted to make the UV administration, headed by team manager Gerald Anthony “Samsam” Gullas, and athletic director Chris Mejarito, proud of them. But they failed, losing to USC, 1-0, in the finals on Sunday at the Cebu City Sports Center.

According to UV Green Booters team captain Kenneth John Cubio Vargas, UV’s move to give attention to them this year worked well for the team, as supporters finally came to cheer for them, especially during the finals.

“It was the first time that we experienced having supporters, that was why we were emotional when the game ended,” said Vargas, who, for the third straight season of the Cesafi, was named as the top goalscorer of the tournament.

The finals was a perfect way to return the favor to the school’s top officials as Deej Villanueva, the executive secretary of Gullas, and Mejarito were watching the game.

But it wasn’t UV’s time yet. Pyke Tinoy scored in the 76th minute to give USC the win, and the title for the third straight year.
Nothing to be ashamed of for UV, though, as they were up against the defending champions.

“It was a great game because they fought hard. I salute our team. Even though they had some trials and challenges, still they showed the true spirit of a Visayanian,” said Mejarito.

Villanueva added he was satisfied with how the team performed in the finals because the Green Booters gave it their all.

“The goal of USC was just part of breaks of the game,” Villanueva said.

There is a bright side to this, though.

Last season, UV finished third. This year’s result meant that the Green Booters are improving, despite the lack of a football field to practice at.

With continuous admin support and hard work from its players and coaching staff, things could look better next season.

What’s important now is that it’s almost sure that UV won’t be known just for the success of its basketball teams in the coming seasons. The performance of its men’s football team this year is proof of that.