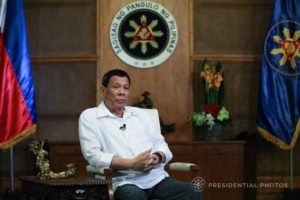 President Rodrigo Duterte on Tuesday announced that he will create his own “sparrow unit” to match the communist rebels’ hit squad.

The “sparrow units” of the New People’s Army (NPA) are known as the rebel group’s hit squads during the Marcos dictatorship era.

The President said his sparrow unit, which he dubbed as “Duterte Death Squad,” will match NPA’s “talent in assassinating people.”

“One of these days I’ll be forced to create my own sparrow (unit)… I will match their talent in assassinating people. Yun ang balak ko (That is my plan),” Duterte said in his speech during the turnover of housing units for the military and police at Camp Rajah Sikatuna in Carmen, Bohol.

(What is missing is my own sparrow unit. That is their advantage. So I am going to create my own sparrow, the Duterte Death Squad, against the (NPA) sparrow.)

The President also asked soldiers and police officers to be watchful and to take precautions and learn to spot suspicious men.

Duterte made the remark just a day after saying that he will no longer hold peace talks with the communist group.