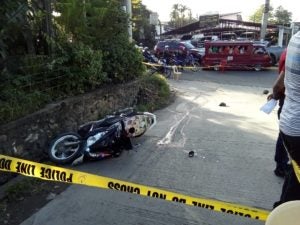 Romeo Mejias, 32, was driving his motorcycle on his way home to Sitio Sto. Rosario in Barangay Jagobiao, Mandaue City at around 3 p.m. today (December 5) when he was fired at by a still unidentified suspect.

A wounded Mejias already fell on the ground but the gunman went on to finish him off.

Mejias was already dead when bystanders rushed him to the nearby Eversley Hospital that is located in the interior of Barangay Jagobiao.

PO1 Glenn Bordalba of the Basak Police Station said that they are yet to locate and identify Mejias’ gunman and the driver of his get way motorcycle.

The shooting incident happened in broad daylight at the corner of the national highway and the Eversley road in Barangay Jagobiao, Mandaue City.

Jagobiao Barangay Captain Michael Masinas said that Mejias was a drug personality who was released from detention for a drug-related case in September 2018.

Mejias came from Consolacion town in northern and was already on his way home when killed.

He just made a left turn to the Eversley Road and was already within the vicinity of the Jagobiao barangay hall when the gunman fired shots at him.

The victim died from multiple gunshot wounds on his body.

Police recovered at least three slugs believed to have come from a .45 caliber pistol at the crime scene.

The shooting incident caused heavy congestion along the national highway.