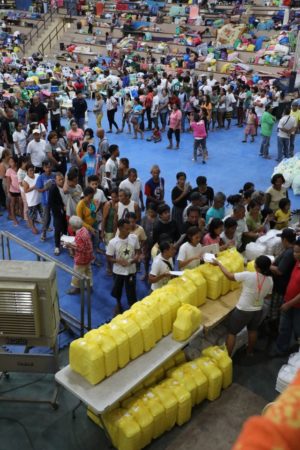 NAGA EVACUEES. In this photo taken on Nov. 8, 2018, evacuees line up to claim their packed lunches at the ECAC Center, the Naga City-owned facility that housed many of the residents displaced or threatened by the massive landslide that hit in September and killed 78 persons, with six others still missing up to now.
CDN file photo

They will finally be home for Christmas.

After almost three months, nearly four thousand persons, including numerous children, from 975 families who have to stay in ten evacuation centers in Naga City in the wake of the September 20 massive landslide are now allowed to return to their homes in time for the holidays.

Naga City Mayor Kristine Vanessa Chiong, during the year-end disaster council meeting at the Capitol on Thursday, announced that the Mines and Geosciences Bureau in Central Visayas (MGB-7) has given them the go signal for the evacuees, whose houses were located within the red and green delineated zones, to go home.

The evacuees will begin to return home on Sunday, December 16, said Chiong.

However, those in the immediate danger zone, involving about 444 households, are still prevented from returning to the area and will be given relocation housing units.

“As promised by (Environment Secretary Roy) Cimatu, the landslide area and the critical zones were subjected to a reassessment. The 444 families that were initially identified will still be relocated but all the rest outside the danger zone will be allowed to go home,” said Chiong.

The signal for the 975 families, involving 3,815 individuals, to go home came with the endorsement of MGB Central Office of MGB-7’s harmonized and revised reassessment of the delineated critical zones surrounding the landslide’s ground zero in Sitio
Sindulan III, Barangay Tinaan.

The harmonized report, the third assessment of MGB on the critical zones, was received by the Naga City government on December 11.

After the massive landslide on September 20, Cimatu ordered the preventive force evacuation of all families residing within the one-kilometer radius from ground zero, displacing 8,262 individuals from nearly 2,000 families.

The first assessment of MGB in the landslide area, which was released a week after the landslide, government geologists identified the danger zone to be 174 hectares within and in the periphery of ground zero.

Some 444 houses were identified as occupying this area, including those that were damaged or destroyed by the landslide.

The Maroon Zone is where the 444 household, which were identified for relocation, stand.

Each of the 444 families has been provided with up to P100,000 financial assistance and has already been
discharged from the evacuation centers.

Chiong said these families are now renting homes while waiting for the completion of their socialize housing units at the Balili property, a coastal area in Barangay Tinaan.

Those whose homes did not fall in any of the delineated zones were also discharged weeks after the second assessment presentation while those residing in the green and red zones, the about 975 families, remained in the evacuation centers. 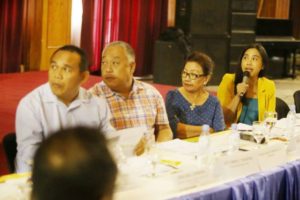 In the third assessment, Chiong said the findings on the cause of the landslide were not changed.

Only the classification of the zones was altered.

Under the third, harmonized report, those who live in the green and red zones will be allowed to go home under some conditions.

In an Information, Education and Communication meeting with the evacuees scheduled yesterday afternoon until tomorrow, December 15, Chiong said they will call in the evacuees to inform them of the development.

“This afternoon until December 15, we will be calling the evacuees per cluster or the green and red zones,” Chiong said in a separate interview.

Chiong said the evacuees will be given a warning card, which will bear the guidelines on what they need to do when they will return home.

“This [warning card] will make them aware that yes, you are allowed to go home but the place needs to be subjected to assessment first if there will be developments especially if dagko ang construction nga himuon (a major construction is involved),” Chiong explained.

“They will be allowed to come home but they need to be more vigilant. When it rains or when there’s a weather system prevailing, they need to evacuate without the need of being forced by the government,” she added.

Chiong also said that the LGU is considering to release a “little” cash assistance for the families before they will be sent home.

Chiong also said that the Naga City LGU is currently working with the Department of Science and Technology (DOST), Philippine Institute of Volcanology and Seismology (PHILVOCS) and the Philippine Atmospheric Geophysical and Astronomical Services Administration (Pagasa) to come up with an integrated early warning system for the areas and for the entire city.

Meanwhile, Chiong has raised during the disaster council meeting that the city is needing more space to build the 444 housing units for the relocated families.

Chiong said that the two-hectare portion of the Balili property earlier donated by the Cebu provincial government can only accommodate 260 housing units.

Gov. Hilario Davide III, in a separate interview, said they will look into giving more parcels of the 24.7-hectare Balili property for the relocation.

The construction is set to begin in January next year with a target completion timeframe of ten months to one year.

Naga City government also allocated P25 million from their 2018 budget to build a counterpart of about 50 units and P175 million in their 2019 budget for another 150 units.

The massive landslide buried 57 houses and claimed the lives of at least 78 individuals, with at least 6 more people still unaccounted for.