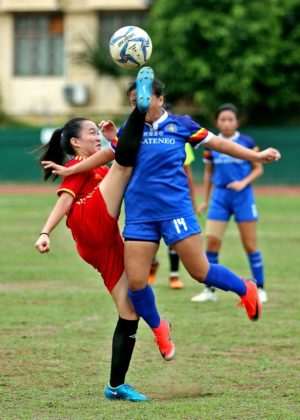 This was how St. Theresa’s College (STC) head coach Tirso Ramon “Jinggoy” Roa described his girls’ defense of the Girls Under 18 title in the 20th Aboitiz Football Cup after prevailing in a penalty shootout against rival Ateneo, 4-3, yesterday afternoon at the Cebu City Sports Center (CCSC.)

“I wasn’t expecting that we would be able to defend the title because I had to scramble for players and I only had four subs for the whole game,” said Roa.

According to Roa, he had decided not to let his Under 15 girls play in the Under 18, thus he had to borrow players from other clubs.

STC ended having six players from the Talisay Razkals and one from the University of Southern Philippines Foundation.

It was not surprising that jelling became a problem for the team but Roa said he just keep motivating the team to overcome that problem.

Roa added that he is happy with the team’s back-to-back win especially that they defeated the same opponent.

STC bagged their first Aboitiz Girls Under 18 title last year also against Ateneo, who was the defending champion then.

“I am happy, that’s normal but I would have wanted them to achieve it at the regular time. As a result, it was nervewracking,” said Roa.

The regulation and extension had ended scoreless resulting to the penalty shootout.

Reese Jumawan of STC was named as the Most Valuable Player.

In the battle for third in the Boys Under 18, Springdale was handed with the third place on a silver platter after Abellana National School (ANS) forfeited in their match.

Some of the ANS players were not able to get to the Sports Center for the match on time.

Meanwhile, today will be a tiring day for former national junior head coach Oliver “Bingbing” Colina as two of his teams will be gunning for the finals–Ateneo for the Boys Under 18 title and the Leylam FC for the Men’s title.

Ateneo will go up against Don Bosco Boys Home while Leylam will face Don Sacredale.

Leylam will be gunning for its third title in its fifth year of seeing action in the tournament. They finished third last year after losing in the semifinals against the University of San Jose Recoletos.

Both finals matches will be played at the same venue wherein the closing ceremonies of the 20th Aboitiz Football Cup will also be held in between both games.