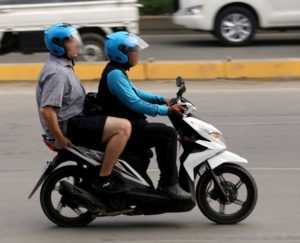 Cebu City Mayor Tomas Osmeña wants Angkas
operations to continue and will file an appeal with the Supreme Court to lift the temporary
restraining order it issued against Angkas.

Cebu City Mayor Tomas Osmeña wants to appeal to the Supreme Court to lift the ban on the operations of Angkas.

“I will be submitting to the City Council a request to conduct a special session to authorize me. I will be making an appeal to the Supreme Court on behalf of the riding public,” said Osmeña in a press conference on Tuesday (December 18).

Last December 5, the Supreme Court issued a Temporary Restraining Order (TRO) stopping the effect of a decision made by the Mandaluyong City Court that would allow Angkas to operate despite objections from transport sector regulators including the Land Transportation Franchising and Regulatory Board (LTFRB).

The LTFRB had earlier filed a case against Angkas, asking the court to suspend its operations because of the lack of a franchise to operate a public transport system.

Angkas, however, did not wait for any court decision and instead, voluntarily stopped its motorcycle-for-hire operations.

In resolving the case in favor of Angkas, the Mandaluyong City court said there was no specific law prohibiting motorcycles from being used as public transport and prohibited the LTFRB from interfering with the operations of Angkas.

LTFRB appealed to the Supreme Court, which resulted to the issuance of a TRO, just four months after Angkas resumed its operations.

Osmeña reiterated that the TRO has made it more difficult for people to travel especially those living in the mountain barangays.

“The habal-habal drivers already have their own legal case. I will be making an appeal on behalf of the riding public, which is really the real people suffering,” said Osmeña.

“They are the highest priority,” he added.

He also said that the decision is creating unrest and destabilization in areas where public transportation is limited.

This gnawing problem of lack of public transportation pushed the mayor to bring the case to the SC in the hope of bringing back the operations of Angkas and other habal-habal drivers.

“The prognosis, clearly, is that it is not healthy. Do you expect the students to walk? We don’t really need this kind of problem,” said Osmeña. 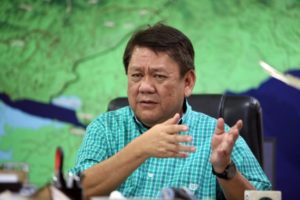 Last Dec. 13, Osmeña posted on his Facebook account that the suspension of the habal-habal drivers will seriously affect almost 30 mountain barangays in Cebu City, which despite belonging to a highly urbanized city, still suffer from the shortage of public transport.

He said the city is allocating an additional budget of P200 million for the commissioning of free buses to transport passengers living in these mountain barangays.

Last Monday, the City Council approved, during a special session, a P15 million allocation for a rice subsidy for 6,000 registered habal-habal drivers in Cebu City.

The city is targeting to distribute all the emergency rice assistance before the end of December.

The funds for the rice assistance will be taken from the city’s share from the Philippine Amusement and Gaming Corp. (Pagcor).

Francisco “Bimbo” Fernandez, executive assistant to the mayor, said the mayor will issue an Executive Order (EO) as soon as possible to determine how to distribute the sacks of rice to the registered drivers.

“The EO will cover how much and when we will order the rice from the NFA (National Food Authority), how to validate the registered drivers, and how to distribute the sacks of rice to the drivers,” said Fernandez.

Fernandez said that the EO is necessary to regulate the distribution of the sacks of rice and to make sure that they are received by the proper beneficiaries.

Osmeña said that the city already organized the habal-habal drivers in the barangays so that they can be registered with the city and be qualified as beneficiaries.

“They told me it’s fiscally impossible. We have to make a mechanism, give them a ticket or something so that the drivers can claim their sack somewhere. We are going to try to rush it,” said Osmeña.

Osmeña also dismissed the claims of the opposition that the emergency rice subsidy for the habal-habal drivers was a political ploy to boost his candidacy in the May 2019 elections.

“That’s so unfair. I did not ask the Supreme Court to make that decision. When you help people who are suffering, they say it’s politics. If they accuse you of not helping people, they also call it politics. We are just helping people,” he said.

“That’s their mindset that all of these is just politics. All I see are the habal-habal drivers who are affected,” he added.

The Supreme Court order is the latest episode in the legal battle between DBDOYC Inc., the company that owns the Angkas app, and the government agencies which insist that motorcycles for hire are unsafe as public transport.

In a statement issued last December 13, Angkas said it would continue “our fight to serve commuters in a safe and efficient manner, as well as legitimizing our riders.”

“We are hopeful that the Supreme Court will eventually rule in favor of the Filipino riding public,” the statement read.

According to Angkas, the TRO will affect the livelihood of 25,000 biker-partners “a few days before Christmas, when their families need it the most.”