Oliver “Bingbing” Donaire Colina (front, third from right) reunited with the Little Azkals, who are now UAAP stars, last August for a clinic spearheaded by the Giuseppe Football Club Manila. In the left photo, Colina dons the Leylam FC jersey and holds the Ateneo jersey in a photo taken right after he coached both teams to their respective 20th Aboitiz Football Cup titles.
CDN PHOTO/MARS G. ALISON

Following his successful stint as a football player, which included playing for the Philippines, Oliver “Bingbing” Donaire Colina is paying it forward by going into coaching.

And so far, his age of 36 years belies the achievement he has had as a coach.

He has coached the Philippine National Under 13 and 14 dubbed as Little Azkals to a third place finish in the Japan-East Asean Football Exchange Programme U-14 Youth Football Festival, which was held in Osaka back in 2012.

The team is the most successful Philippine boys junior team to date.

“For me, coaching is like developing kids for their future, so they can avail of free education,” said Colina, adding that “coaching, also, is not just about football, it is all about you learning about life.” 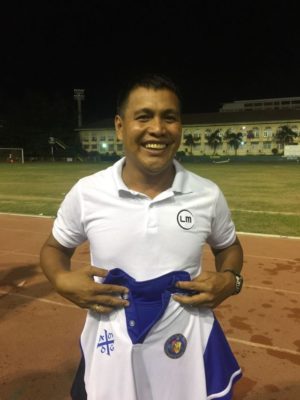 Just last week, Colina added another feather to his cap as he coached the Sacred Heart School-Ateneo de Cebu to the Under 18 boys title and the Leylam FC to its third men’s title of the 20th Aboitiz Football Cup in just one day.

Colina started his coaching career in 2006 and got his C license in 2009 in Malaysia which was part of the Asian Football Confederation (AFC) Project Future Coaches for batch 2009, wherein he was the only Cebuano chosen for the project.

He immediately got his B license right after and now, he is just waiting for the results of his A license course.

Colina admitted that when he started coaching, he wasn’t serious about it as it was just something to do to pass the time and have fun.

However, he got motivated by Brian Bedford, the athletic director of the Cebu International School where Colina started his coaching career.

“I’m happy coz it is really my game. I get satisfaction in helping players get a scholarship because that is where I started too. And, it is also nice to teach kids to excel in sports,” said Colina on what he likes about coaching.

Colina is a product of the San Roque football field, which is one of the oldest pitches in Cebu.

For Colina, football has helped him so much especially in life.

“Helps a lot … thru discipline, responsibility and you will really learn about life, imagine you are 11 players on the pitch, each with a different mentality but in that moment, you unite for one goal, so imagine the understanding that you have for each other,” Colina said.

For Colina, he still needs more experience as a coach despite his achievements.

“Honestly, for me coaching is always learning everyday, during training, matches,” said Colina. “My best experience in coaching was when I got a chance to coach a national team (referring to the Little Azkals).”

“I think more kids that I can improve and help in getting a scholarship. Because I started there too. I finished school thru a football scholarship.”