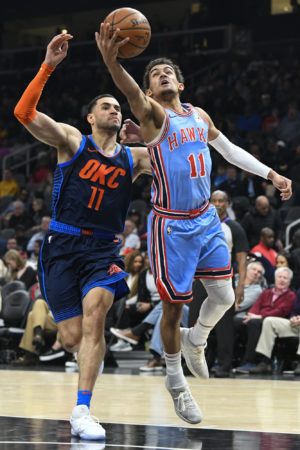 ATLANTA — Trae Young had 24 points and 11 assists to win the showdown of past and former Atlanta point guards, leading the Hawks over the Oklahoma City Thunder 142-126 on Tuesday night (Wednesday morning, Philippine time).

Former Hawks point guard Dennis Schroder scored 21 points in his return to Atlanta. Schroder struggled early but had 14 points in the third period when the Thunder outscored the Hawks 41-27 to reclaim the lead.

Atlanta was similarly dominant in the second period, outscoring Oklahoma City 45-30 to match its high mark for any quarter this season. After holding a big lead of 15 points, the last time at 70-55, the Hawks led 70-59 at halftime.

Led by Schroder and Russell Westbrook, Oklahoma City answered strong in the third period. A jumper by Westbrook tied the game at 87-all.

Schroder scored the Thunder’s final 11 points of the third period, the last six on free throws, for a 100-97 lead.

Westbrook led the Thunder with 31 points and 11 assists. Paul George had 24 points and Jerami Grant added 21.

George sank a 3-pointer with about 90 seconds remaining to cut Atlanta’s lead to 132-123, but the Hawks quickly pushed the advantage back to double figures.

A steal and reverse jam by DeAndre Bembry iced the win.

The Hawks had a “welcome back” video tribute for Schroder during a first-quarter timeout. Schroder raised his arm to acknowledge the fans.

The Hawks wore new powder blue uniforms with red trim and numbers for the first time. The uniforms were introduced as part of the Hawks’ 50-year celebration in Atlanta.