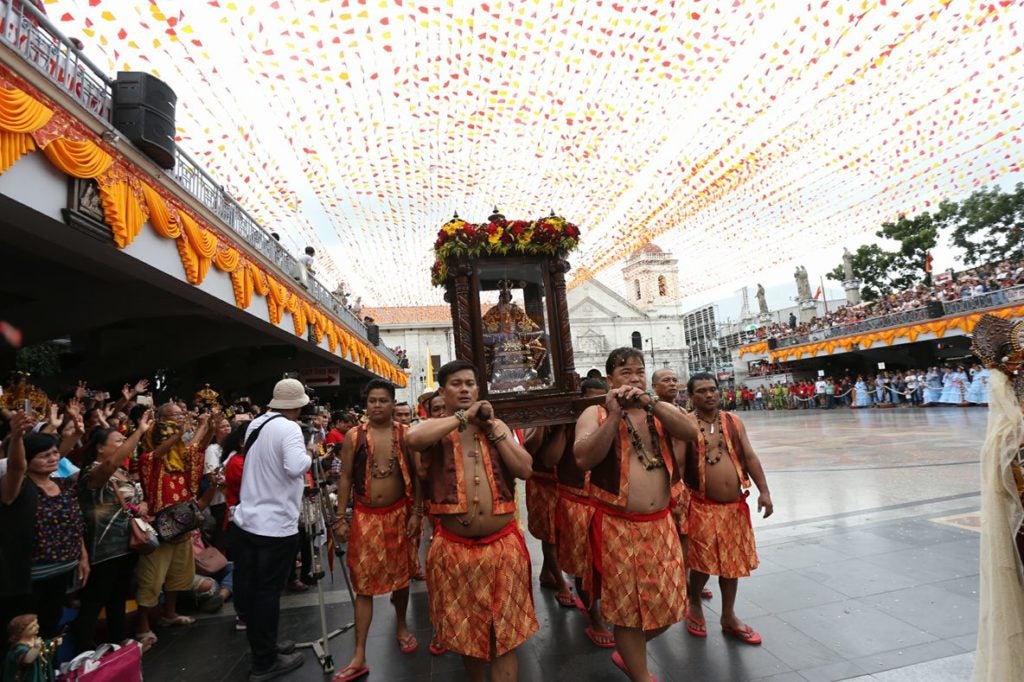 The reenactment of the Christianization of Cebu, staged on Jan. 19, 2019,  is one of the highlights of the celebration of the Fiesta Señor or the Feast of the Child Jesus.  held every third Sunday of January, which this year falls on Jan. 20. |photo by Junjie Mendoza

CEBU CITY, Philippines — Bells pealed and not a few were in tears as the images of the Sto. Niño and the Our Lady of Guadalupe were brought inside the Basilica del Sto. Niño’s pilgrim center.

The glass-encased pilgrim image of the Sto. Niño was carried by men dressed as Spanish soldiers while the icon of Our Lady of Guadalupe was brought to the altar by bare-chested “natives” in slippers. Spanish soliders then planted a cross with a white cloth beside the altar.

While this went on, a Cebuano hymn in honor of the Holy Cross was sung.

Using a wooden ladle, he sprinkled holy water on the heads of actors portraying Cebu’s chieftain Rajah Humabon, his wife Humamay, and a group of natives. Cebu’s Humabon got the baptismal name Carlos while his wife was named Juana.

After the renewing their baptismal promises to “reject Satan and to believe in the triune God,” the the crowd of about 2,000 devotees were blessed with holy water by priests who concelebrated the Mass.

As baptismal gifts in 1521, Magellan gave to Queen Juana the image of the Sto. Niño and a small statue of the Blessed Virgin Mary. This small image was later found in a well and turned over to the Cebu Cathedral. However, The Virgin’s  original image couldn’t be located.

The original image of the Sto. Niño, on the other hand, is venerated in a glass case inside the side chapel of the Basilica.

Carlos received the image of the Ecce Homo or the bust of the suffering Christ. Only centuries later, or in August 2011, the original wooden sculpture of the Ecce Homo was returned from the San Agustin Church in Manila to the Basilica del Sto. Niño.

The image of Our Lady of Guadalupe, which was believed to be the icon received by the island natives, is now enshrined at the Archdiocesan Shrine of Nuestra Señora de Guadalupe de Cebu.

After the Mass, Sinulog dances (one step forward-two steps backward) were performed by members of the Cofradia del Sto. Niño, the Mabolo group, Our Lady of Guadalupe, and the Sandiego Dance Troupe.

Some devotees were seen teary-eyed during the celebration./elb