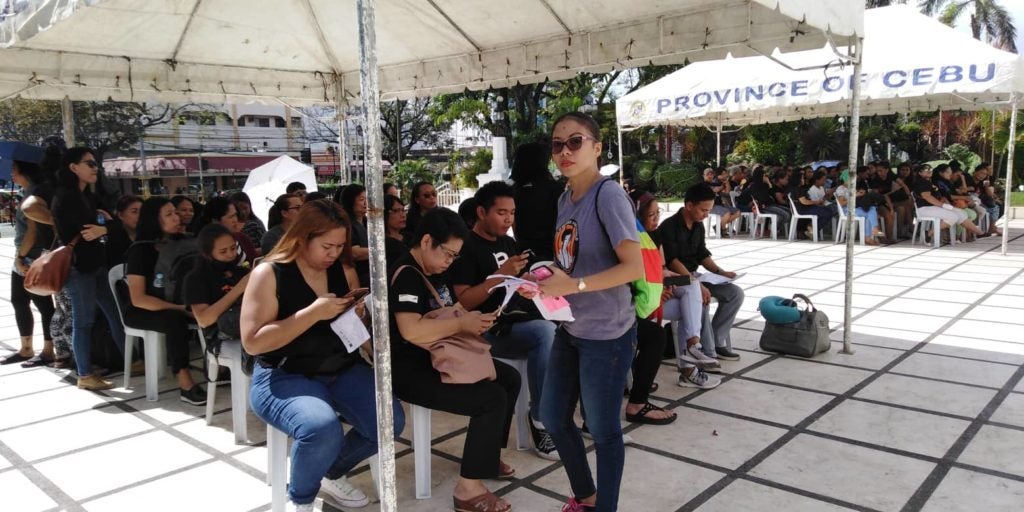 Lawyers belonging to the Children’s Legal Bureau  and members of the Childen’s NGO Network protest the passage on second reading of House Bill 8858 that lowers the minimum age of criminal responsibility to 12 years old. | CDNDigital photo/Delta Dyrecka Letigio

CEBU CITY, Philippines — Children’s rights activists and cause-oriented groups in Cebu took to the streets on Friday to voice their opposition to House Bill 8858 that will lower the minimum the minimum age of criminal responsibility   from 15 years old to 12 years old.

The Children’s Legal Bureau (CLB) and other cause-oriented groups under the Children’s Non-Government Organizations (NGO) Network said Congress must  reconsider HB 8858 because a 12-year-old child has yet to  reach the optimum psychological stage for discernment.

The protest followed the passage of HB 8858 on its second reading on Wedneday, January 23. The bill is backed by House Speaker Gloria Macapagal-Arroyo.

Lawyer Noemi Truya-Abarientos, CLB spokesperson, said that the Children’s NGO Network strongly opposes any bill that would lower the minimum age of criminal responsibility (MACR) of minors from the current whalevel at 15 years old.

Abarientos said  the  lawmakers blindly allowed the passage of the bill merely because it was backed by President Rodrigo Duterte who wanted the MACR lowered in order  to deter crime syndicates from using children.

Abarientos said she does not expect that Congress will listen to the protests and will back down on HB 8858 bu the Children’s NGO Network will not stop  fighting it.

Lawyer Vincent Isles of CBL urged the national government to focus on improving the facilities of the Department of Social Welfare and Development (DSWD) and programs for children in conflict with the law (CICL) in order to rehabilitate juvenile delinquents.

Isles said that there are diversion programs to better the rehabilitation of delinquents such as strengthening community-based support.

The three-hour protest began at 8 a.m. on Friday at the Fuente Osmeña Circla and traversed Osmeña Boulevard to the Cebu Provincial Capitol grounds where former CICLs shared their stories of rehabilitation and how they were able to overcome their past as CICL. /elb