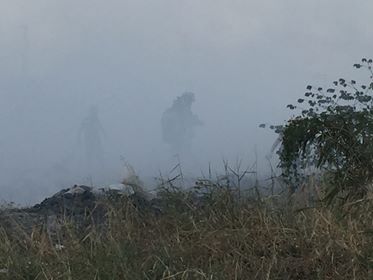 A firefighter puts out the rubbish fire in an empty lot at F. Zuellig Ave. in the Cebu City side of the North Reclamation Area that hit the area past 3 p.m. of Saturday, March 16, 2019. | CDND Photo/Delta Dyrecka Letigio

CEBU CITY, Philippines — A vacant lot used as a dumpsite for discarded rubber tires at Block 27  in the Cebu City side of the North Reclamation Area caught fire on Saturday afternoon, March 16.

Firefighters from Mandaue City and Cebu City responded to the fire alarm received at 3:21 p.m.

The area used to be the impounding area of the Cebu City Traffic Office and located at the boundary of the two cities.

Thick black smoke coming from the fire site can be seen as far as Osmeña Boulevard in Cebu City, which is located around eight kilometers south from where the fire broke out. 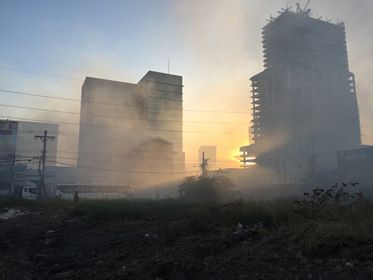 Smoke from the rubbish fire that broke out in an empty lot at F. Zuellig Avenue, North Reclamation Area in Cebu City on Saturday afternoon, March 16,2019, is being blown by the wind to the nearby streets and establishments. | CDND Photo/ Delta Dyrecka Letigio

It took firefighters around 40 minutes or at 4 p.m. to douse the flames and officially declare a fire out.

Fire Officer 1 Lina Uy of the Mandaue City Fire Station told Cebu Daily News Digital in a phone interview that an investigation is still being conducted to determine the cause of the fire. /elb