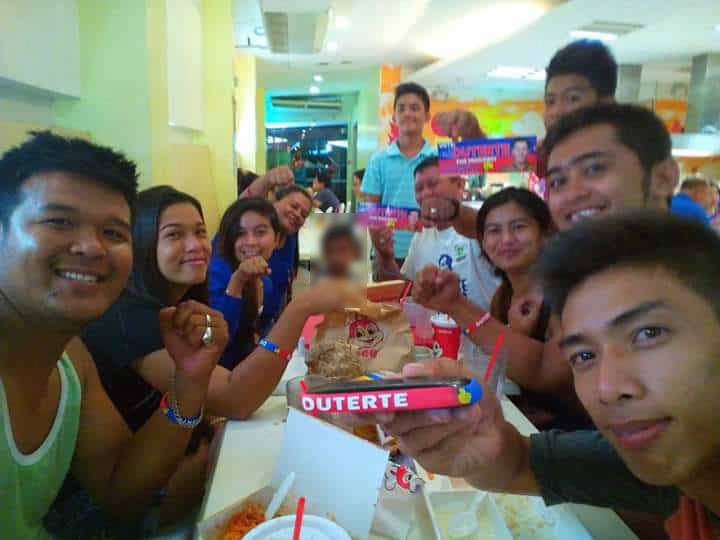 Michael and Fraldine Canes (first and second from left) and their family openly supported the President Rodrigo Duterte in the last 2016 elections. | Contributed Photo

MANDAUE CITY, Cebu, Philippines — The family of Michael and Fraldine Canes, the couple who were shot dead in Mandaue City close to midnight of Sunday, April 14, 2019, will be seeking the help of President Rodrigo Duterte regarding the case following the pronouncement of the police that they were involved in the illegal drug trade.

Fraldine’s mother, Geraldyn Remayla, told CDN Digital that the couple and their families have always been avid Duterte supporters and openly supported the President’s campaign against illegal drugs.

For this reason, Remayla refused to believe her daughter and her son-in-law were involved in the illegal drug trade as claimed by the Mandaue City Police Office (MCPO).

The MCPO recently said that Michael and Fraldine were part of the drug watchlist since October 2018.

(We have always been supporters of President Duterte. Our family are very much against illegal drugs. My daughter and my son-in-law do not even smoke and drink alcohol.)

She said Fraldine and Michael never engaged in illegal drugs but worked hard in their online clothing business, which took them years to put up.

Remayla is planning to go to Malacañan Palace after the burial of the Canes couple to seek an audience with President Rodrigo Duterte.

“Ana siya pwede bisan kinsa moduol niya. So moadto ko mangayog tabang ug hustisya (The President once said the palace is open to anyone. So I will go to him to seek for help and for justice),” said Remayla.

She said the police has been hasty in their pronouncements that the couple were part of the illegal drug trade but could not provide any “concrete” evidence of the actual involvement.

The family still believed that the motive of the killing was robbery since the closed-circuit television (CCTV) footage that the perpetuator took the bag of Michael.

Remayla, whose other children and grandchildren helped the couple in their online business, could attest that the couple only sold legitimate products.

She challenged the police to check the CCTV of a mall in Mandaue City where they were arranging the items, which were part of the package the couple sent to Bantayan Island through the North Bus Terminal on the night they died.

One of Remayla’s niece told CDN Digital that they have been helping the couple with their online clothing business especially in packaging the items.

They often referred to them as “Madame” and “Bossing.”

The same monikers came out in the drug matrix of MCPO in direct line of the notorious “drug queen” Jocelyn Encila as transporters of the Ygot drug group.

Remayla said the couple had extensive connections among other online sellers in Cebu because they sold ready-to-wear (RTW) clothes in bulk.

She said they worked day and night in the RTW clothing business because they wanted to provide a good life to their eight-year-old daughter.

“Mao na maluoy unta ang mga police sa ilang mga gipangsulti sa akong mga anak. Maluoy sila sa akong apo. (That is the reason why I hope the police will be merciful with their words against my children. I hope they have mercy on my granddaughter),” said Remayla.

Remayla admitted that she no longer trusts the police to handle the case and they are looking into seeking the help of the National Bureau of Investigation (NBI) to seek justice on the death of the couple. / celr

Read Next
High-scoring games in MCBL over the weekend