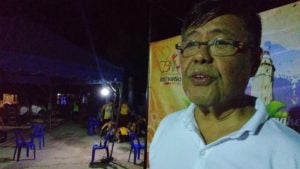 San Remigio Mayor Mariano Martinez says they will open a museum in the town to highlight their history and heritage. CDND PHOTO / Cris Evert Lato-Ruffolo

SAN REMIGIO, Cebu—A history and heritage museum will rise in this northern Cebu town in a move to further promote its potential as a travel destination.

In an interview with CDN Digital on Saturday, June 22, Mayor Mariano Martinez said he is coordinating with the National Museum of the Philippines to bring back to the town the artifacts that were discovered during a series of excavation work back in 2011.

The 2011 excavation was a joint archaeological fieldwork between the University of San Carlos and National Museum of the Philippines.

The team of archaeologists led by Dr. Jose Eleazar Bersales recovered metal tools and earthenware pots dating back to the Iron or Metal Age in the Philippines, which runs between 1,000 B.C. to A. D. 900.

The excavation site was at the municipal beach and created quite a stir back in 2011. It was sincd visited by schools and organizations. A team from the University of Guam even came over to help out.

An exhibit was put up for public display.

Martinez said the San Remigio Museum will be located in the building located near the famous Lapyahan sa San Remigio.

“What happened was… the diggings were brought to the National Museum in Manila. Now we’re asking them to bring them back here because it could also be a potential for visitors to come. We can show them history, not only of our town but also of the province, ” said Martinez.

Martinez said they found another area for excavation near Lapyahan sa San Remigio.

The mayor said a team from the National Museum will come over to San Remigio for the excavation.

The town of San Remigio is located three hours away from Cebu City or a distance of 91.5 kilometers.

Martinez said San Remigio town has more than 300 rooms with major resorts such as the San Remigio Beach Club and Hagnaya Beach Resort and Restaurant.

Martinez said the entry of Maayo San Remigio in Barangay Victoria opens another 82 rooms for the town.

The local government unit of San Remigio also provided support for the third edition of Lumba’g Laag sa Sugbo, adding that their participation will provide exposure to the town.

“To bring in tourists is really about exposure. If we have the proper exposure, we will be able to help our resort owners get more guests,” he said.

“In the process, it will be better for our business and for our municipality,” added Martinez.

Read Next
Photo Gallery: Aspins get special treatment on their special day